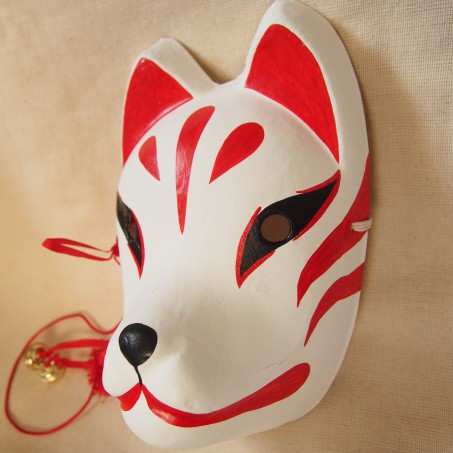 Fox is considered to have supernatural power since old days in Japan.
Fox is worshiped as a god of harvest.

People often worshiped fox statue in the shrine praying for good harvest in the old days.

Another face of Fox Nine-tailed Fox

Fox is sometimes connected to mythological fox spirit as well as a God of harvest.

Nine-tailed fox Kyubi originally from China is famous.
The more tails they have, the more powerful they become
.
This Kyubi is said to have transformed itself into human and bewitch people.
That’s why either way fox is sometimes regarded as mysterious creature beyond human knowledge.

Fushimi Inari shrine in Kyoto must be most famous for Oinari-san with hundreds of shrine gates.
It is the head shrine of all Inari shrines in Japan.
This Oinari-san is worshiped as a guardian deity of prosperous business, well‐being of one’s family, safety of driving business, improvement in the performing arts.


I sometimes have a chance to see this Japanese Fox Mask lately.
It was usually used in limited places such as festival during dancing or hanged on the wall in the old days.

But from my point of view it comes to becoming kind of a modern fashion.
I can see some fox-themed or fox character appearing anime such as Gugure Kokkuri-san, Kamisama Hajimemashita, Gin Gitune, Inu Yasha, etc.

In music scene baby metal is now famous and fox mask is their symbol.
Some cosplayer put on fox mask and it also becomes a part of costume even to ordinary people when Halloween season comes.

Fox mask was traditional thing and only used in traditional way in the old days.
But young generation paved the way for new ways now.

It is now cool item mixed traditional and modern fashion.