A Silent Voice (Koe no Katachi) : Meaning of “Koe” and Ending Scene

“A Silent Voice” became a controversial when it was released in 2016.

Some people said that was a great film but the others said that’s a terrible one.

There were people who said the film took advantage of disabled person.
The heroin Shouko was also too kind character so it was too unrealistic, etc.

As for me, it was a great movie.

If I write all the thoughts about this film, it’ll be too long so I introduce you the part of it.

※ This article contains a spoiler, so if you do not want, I’m glad you to come back here after watching or reading A Silent Voice

Some people who criticize the film pick up something related to bullying and disability.
But actually that’s not the essence of this film.

We Japanese usually use Kanji “声” for “Voice” in a daily life but here “聲”, which is very old Chinese character, is used instead.

Using voice is not the only way to convey your thought.

And this “聲” is not just the superficial voice or thought.
It is your and others’ real voice and thoughts sometimes we ourselves can not properly catch or listen to.

This film is all about “communication”.

And communication is not the one way, it is always two-way.

Shoko, who is being bellied, looked like really poor girl but she also had a voice.
Before bullying and disability, she was a human being.

And sometimes we ourselves misheard the real voice when we thought we understood the other.

The theme of A Silent Voice is not just for a child but for all the people.

Meaning of the Ending

Facing Voices of Others

Shoya was too afraid of the voices toward him so he created “X mark” and put it to the faces of all his classmates.

Since he was bullied, he felt like as if all the others were saying his bad names.
Shoya could feel safe if he put X mark on their faces because he does not need to face them.

But in the last part, he decided to face to the voices of others.

Then all the X mark dropped off from the all the other people.

It was really a touching moment.

And what makes me moved more was he even listen to the voice someone says
“How dare he can come to school”.
This incident is not in amime film but only in comic.

It was not the voice from his imagination like before, but real one.
That’s the voice he most afraid of.

But he accepted even a bad mouth.

In a real meaning, he started to listen to the voices of others.

Yes, whether it’s good or bad, everyone has a voice.

Good and Bad or White and Black is not the everything

One of the key characters and made this anime really attractive is definitely Ueno.

Although there are pros and cons, I sometimes felt she got a point.

Certainly she was one of the bully members and even now she does not apologize for what she did in the past.
But I think she was also the one who faced Shouko without colored glasses and asked her real talk.

She tells her at least she also struggled with.

In the last scene, she tells Shoya

“I’m just… an awful person. Even after all this… I can’t bring myself to like her…, I don’t want to like her”

“What you like and what you don’t isn’t everything.”

My impression for people who cause us hatred

I think if we pick up the characters we can not bring ourselves to like, they would be Ueno, Kawai and the teacher.

But I also felt like they were not just bad people.
Rather, they sometimes have a point.

Bullying itself was very bad thing but Ueno struggled and asked for real talk without pretending.

She also tried to hold occasion for others to make up relationships several times although all of them didn’t pan out.

Then many say Kawai was the worst and narcissist but when she talked back Ueno and hugged Shoko saying “You have to learn to love even the things you hate about yourself and move forward”, there was no pretense.

Top of it, if I add, many of us have a part of Kawai more or less and we just do not realize or forgetting by ourselves.

To symbolize part of us, Kawai also exists, I think although there are real people like Kawai in real world, too.

Shoya’s teacher looked like a bad one but he was also not just a bad guy.
He, at least, told Shoya to stop bullying several times although he should have scolded stronger.

When Shoya visited school again the teacher, he certainly looked like terrible one but did you notice he understood sign language of Shoko at the time (this is the part only in comic).

And when he sees both Syoya and Kyoko going back, he mummers
“You became a fine person as I said”.

It is not about his status but about Shoya himself.

My impression on Koe no Katachi

I just have to say this is really great work.

To the details, paid attention.
Story, emotions of both sides, animation of each scene, voice actor, music, etc.

If it just said bullying is bad and all of those regret and finish, then it just became an ordinary anime film.
It became just a superficial one-way film instead of no criticism.

I think most people feel bad or sometimes hard to keep reading or watching because most of us experience the similar things more or less in our lives.

Because it is all about “communication”.
So I can say we have to face it whole our lives.

To tell you the truth, I myself experienced both sides at the same age as Shoya.

Of course, it was not like such a tough ones (although I myself feel use the word tough or not isn’t appropriate) and the things I did and experienced were different.

But the thoughts and experiences Shoya suffered was what I experienced.
So I could really understand Shoya’s flows of feeling.
And his surroundings.

There are roughly 3 types of people, bully, person being bullied and people just keep away (most people belong to this) when there is a bullying.
And each characters represent them.

But essence of A Silent Voice is “Koe”, bullying or disability is a part of it.
All the people have thoughts and opinions.

We have to listen to all the voices removing colored glasses.
Like Shoya accepted even to a bad mouth fairly in the end.

Summary : Many Thanks for Yoshitoki Oima and Kyoto Animation Studio 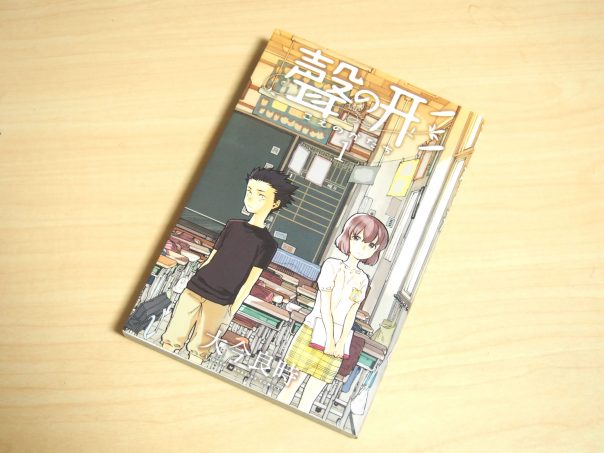 I was really moved by the film.

We are used to listening to our voices and often not listening to “real” voice, that is, “聲” of others.
We just think we understand others and do not even notice that’s “our thought”.

There is no black and white and this can falls on Shouko, too.

It was really surprising the author Yoshitoki Oima was 19-year-old when she made this “Koe no Katachi”.

And animation was made by “Kyoto Animation Studio”.

Producer Naoko Yamada read the comic and was so attracted that she went to the publishing company directly to negotiate realization of animation film.

If you want to see how A Silent Voice was made & interview of producer Naoko Yamada and voice actors, check the link down below (it is only in Japanese).

You can see the building and workplace at the time, too.

If you still don’t read the comic, please read it as you can understand the real connection much more (the contents also become much harder at the same time)

There was also review that said all the schools show this film for the children or the students and have enough time to exchange opinions.

I think there are various opinions on A Silent Voice.

And I think that’s that.
Everything is OK.

I think that’s the point this work wanted to convey.

Other Recommended beautiful animation by Kyoto Animation Studio
Review of Violet Evergarden Ending! Who did she meet with in the last scene?

« Review of Movie of Dragon Quest: Your Story which became a controversial movie!!
Visited Tokyo Ghoul:re CAFE in Ikebukuro! Mazui Sandwich was worth trying for braver!! »