HOME > Anime > Review of Movie of Dragon Quest: Your Story which became a controversial movie!!

Review of Movie of Dragon Quest: Your Story which became a controversial movie!!

Movie of Dragon Quest: Your Story is becoming controversial in Japan now.

I think most people from overseas think like what’s the problem?
3D animation and its music is great.

As for me, actually I enjoyed it and have a good impression on the movie but I also understand the criticisms of people.

I’ll introduce both opinions with my impressions here.

※ If you do not want to see spoiler of the film, it includes spoiler that it would be great if you come back after watching the movie

Get back to real world forcibly

The consensus of those who criticize the movie is all about last scene, I can say.

The moment, strange atmosphere hung over the whole room of movie theater, I remember.
All the people including me were like “What on earth is happening?”

It’s the first time for me to be surrounded by silent sound in a theater that it was a valuable experience.
Whether or not good, it was a wondrous forcible sense of unity.

I expected the Hero to defeat final boss but the final boss Grandmaster Nimzo that appeared on the last scene was surprisingly Computer Virus!!

It tells the Hero that all the adventure up until now is not real but VR, that is, the world was made all of virtual reality.

And the protagonist also reminds the moment he entered the world of virtual reality by setting the VR.

Yes, he is told that things including all the battles were happened in the world of all virtual reality.
His wife Bianka, his son Arus, the boss Gema, all the characters were also programs.

And it tells him “Be an adult”.

I understand all the people go back to real quickly.

Of course, it adds a supportive part after the scene.

Still, the main criticism of the movie is, what people say is, this “last part was unnecessary”.

Fast development of the story

There was a criticism saying the story develops too fast.

It can not be helped as they have to compress whole Dragon Quest 5 into just about 1 and 45 minutes, I think although I was also the one of them who could not keep up with the story.

I think I certainly cleared the game but it was as if I were watching new story.
Thanks to that I could enjoy, so it is OK, though.

This point, no professional voice actors used in the movie, is also one of the many criticisms.

There was a voice even says “I decided not to go see a movie theater before the things like criticism because they didn’t use professional voice actors”.

I see, certainly all the casts are famous actors.

This often becomes controversial as well like the work of voice actors are taken over by actors.

I wonder if they applied studio Ghibli method for this.

And other part is, it is like the case of the last part of movie that puts us back to the real world, it’s all about “Customer Attention”
Certainly voice actors have many thick fans but the number is totally different compared to popular actors.

Much more fans follow by using popular actors and that means “attracts many customers, makes profit”.
So much money must have been invested to make this whole 3D CG movie, so they can not fail and put the company in a crisis situation in any way.

Still, I wanted to watch the work made by all professional voice actors, too.

So, if people visualize the impressions on the movie it seems to become like the flollowing image.

Japanese says “Everyone before watching Dragon Quest (Left image) and I who are leaving the theater (Right image)”.

For this 3D CG animation, even most people who criticize last scene also say great.

Not only the beautiful images but also characters move very smoothly.
I felt like the 3D CG technology finally came to this point.

Its music also had a good reputation.

Yes, no doubt, because the person who is in charge of all the music is Kouichi Sugiyama.

I think no need to introduce detailed explanation of him here anymore.

When it comes to Dragon Quest, its music is very famous.
I think even the people who have not played Dragon Quest know the music here in Japan.

I felt like just listening to the music alone worth visiting the theater.

Had a good time without problem

Although it is a minority, there were still impressions saying had a good time.

And I’m one of them.
Yes, I could enjoy the movie.

There were both people, heavy player of Dragon Quest while others are no experience of playing Dragon Quest, but both of them said they had a good time.

My impression on Dragon Quest: Your Story 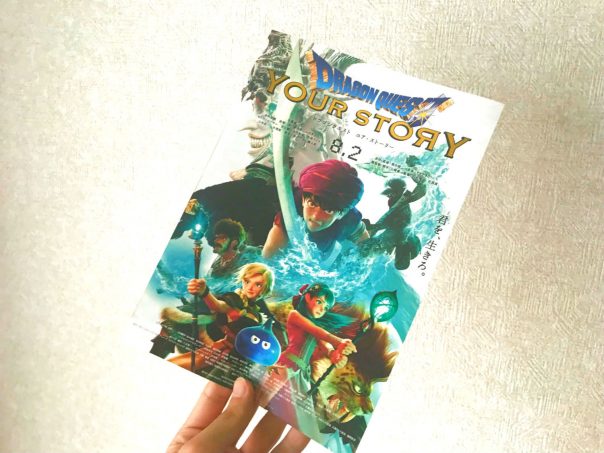 As for me, the private impressions on the film, actually, I went back to real world far ahead of the last scene which created criticisms.

Which is “all about marriage”.

The process of deciding fiance, whether he choose Bianca or Flora is long.

I expected “The Dragon Quest”, so within the first half, I had already gone back to the real world gradually.

Do these things related to love romance need to spare that much time?
Do they need Dragon Quest for that kind of thing?

Like that, rather than dive into the world of Dragon Quest, I cooled down in real world.

Actually, I surprised at the last scene but not like got a shock, rather, I thought like “I see, yes, this kind of result could also be OK”.

Humans, enemies and boss are all programming and the part protagonist says “Still, they certainly had emotions”, etc.

The moment what I had in my brain was the world of “Sword Art Online” only.

Does this idea came from that?
Inner conflicts of the protagonist like it is just a programming so it doesn’t matter, no, it is not like that.

What I worried about is adult is still OK even if they get shock as they are “adult” but what abut a child?

What do children feel like when they watch it?

I wonder they might be stunned by being hit by the reality at the end which says everything is not right, all made-up world when they immerse themselves in the world of Dragon Quest.

If I were a child and went see a theater to watch this, I would be stunned at the end.

It’s OK if the child has a capacity to enjoy even this scenario but does they made this movie aimed just for the adults who once were into Dragon Quest 5 from the first?

I thought back the reason why I could enjoy it when there were many criticisms and maybe I think it’s largely because of I was just “empty” .

Dragon Quest 5 was the only video game of Super Famicom I managed to clear (I’m poor at playing video games) and it was about 25 years ago.

Yes, I had already forgotten the story completely.（￣－￣）ﾎﾟｶｰﾝ

The events which came one after another were all new to me although I cleared it. (´Д｀
I was surprised a lot even at the appearance of the son.

Did his son appear in the game?

Plus, as I told first, in the first part of the movie, I had already cooled down to watch by going back to the real world thanks to the long process of marriage.

After that, rather than story, like animation is beautiful, music is also nostalgic, good, I was not so into story itself, rather, how can I say it, I was watching it in a sort of empty mind, and that might had a big effect, I think.

Anyway images were very beautiful、as for me, this is the main reason I could enjoy it a lot.

Finally modern technology came to this stage, so I was really moved by the 3D CG animation images!

Especially, the moment Arus drew Zenithian Sword, GreatΣ(ﾟДﾟ), I felt all the techniques and emotions of creators who worked on this movie gathered together and I was really moved!

Just seeing this moment worth visiting, I felt.

That is “Kono Michi Waga Tabi (This way My journey)” composed by Kouichi Sugiyama.

This might be a sort of cliche but I like the part the protagonist says “Nevertheless, the days I spent was not waste” at the last.
The days we spent themselves were never ever virtual.

So, I was always trying to play video game the moment my mother went outside although the console always had the destiny to be hidden in the end.

But I also think video game is not useless or waste of time.
Actually, you have to use brain to clear RPG game.

There is even a time friendships made through playing video games (Although there is also a time the friendship is broken thanks to the video game).

It’s not like this is game, so not real thing, not that kind of separation but I think I who play video game is real and I who survive in real world is also real, both of them are same real world and same I. 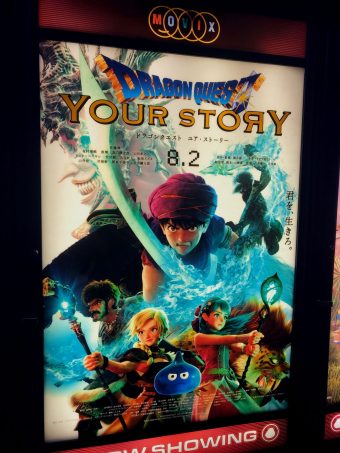 Game is, Dragon Quest is, I think, life itself.

Each one has a different equipment, different ability inherently.
Some of them are blessed with and the others are not.

But, we have to do with what we have.
Rather, that’s the thing.

On the way, there are times to run away or lose in front of various enemies or walls but we still challenge again after trained or level up with preparation of armors and arms.

Along the way, friendship is born, then it becomes a party and we pull together to challenge the tough thing which can not be accomplished alone.

There might be a case you learn and practice under the instructions of a master.

Of course, there is a case you die on the way of fulfilling your target but that’s also a life.
Only spell of restoration or Zing doesn’t exist in real world, so until the day, we live everyday, each moment, to the fullest.

Personally I like the idea of becoming friends with the enemy monsters in Dragon Quest 5.

At the time of release of Dragon Quest 5, I felt like it was not like the Dragon Quest I once knew.
Dragon Quest is all about battling and fighting with monsters and this time the Hero also looked like a gentle magician with a wooden magic wand.

“Hold out the hand to the enemy that you defeated”, this is a part of lyric of ending theme song of anime “Dragon Warrior: Dai’s Great Adventure”.
I was watching it every weeks.

I came to like to play Dragon Quest again, well, rather I’m curious about Dragon Quest Walk.
I wonder if they release soon.

« Tokyo Ghoul (and :re) best quotes and moments with Japanese!!
A Silent Voice (Koe no Katachi) : Meaning of “Koe” and Ending Scene »