Bikkuriman Stickers made a big hit in 1985 in Japan 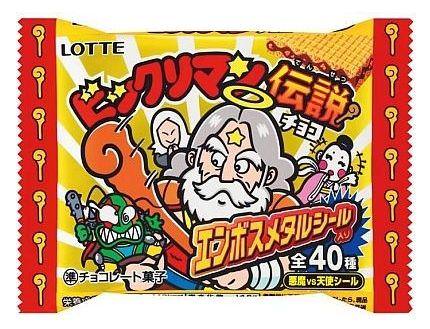 Have you ever heard of Bikkuriman?

It is a chocolate wafer with a small sticker bonus.
It seems like just a sweet for a child but it became a big hit in Japan and it even became a social phenomenon in Japan.
The value of its rare seals are more than $1000 now. > _ <

Anyway there are many stories and marketing behind the hit.
I introduce them in this article.

Original Bikkuriman was released in 1977.
It was a waffle peanut and chocolate snack with a small sticker.
You could buy it at about 30 cents at the time.

Bikkuri means surprise in Japanese that the concept of the sticker was giving people a surprise.
Original sticker was called Dokkiri seal and Dokkiri is almost same meaning with Bikkuri.

I can say most of all children, especially boys, were really into collecting this small sticker and some children had hundreds of them.

The boom continued until 1992.
But after that, the popularity has decreased and the price became 60 cents in 1998 with a bigger sticker.
You couldn’t see no more children that were once rushed into the store for collecting Bikkuriman.

But it has been becoming popular again with its new release and collaboration with famous anime or character in 2013.

Many Children threw away its Wafer

It was good Bikkuriman became a big hit.
But what child really want is not its snack or wafer but sticker itself.
For them, sticker is not a small bonus but the snack was the small bonus.

So when child buy it at the store, they open it and take the sticker out and throw its wafer into the garbage can in front of the store.

And rich people could buy not only 1 or 2 packs but 1 or 2 boxes.
1 box holds 30 packs of Bikkuriman and they can not eat all of them that they throw away the wafers in the end.

It is certainly not a good thing and it became social issue nationally in Japan.

Some people or rich people bought 1 box or 2 box instead of 1 pack or 2 packs.
That caused shortage of Bikkuriman that some stores limited its sales to 2 or 3 packs at the maximum per customer.
And applied counter selling only for Bikkuriman.

Fake Bikkuriman appears by the name of Locchi

Bikkuriman was created by Japanese giant confectionery maker Lotte.
And the backside of the sticker, there was the name of its maker’s name Lotte on the top.

But some of them were Locchi instead of Lotte.

Yes, this is the evidence of fake Bikkuriman and many children were cheated in those days.

Actually if you write Lotte and Locchi in Japanese Katakana, it is very similar and a bit hard to tell the difference at a first glance.

How does it mix into authentic Bikkuriman?

There was also Gacha Gacha or Gashapon that sells toy in a capsule.
And you could buy Gashapon of bikkuriman at a cheaper price.

You know, for 3 packs of Bikkuriman, we had to pay 90 cents while 5 stickers of Bikkuriman for Gashapon was $1.
Gashapon had no wafer but cheaper in total and we were not interested in wafer in those days.
So children gathered around Gashapon machine and rolled a Gashapon.

But the stickers inside Gashapon were all fake.
Innocent child were kept rolling a Gashapon that holds fake Bikkuriman sticker.

I’m surprised at how the company could this heartless thing, cheating innocent child boldly in those days in Japan.
I would lose heart when I found the name Locchi on the back among my stickers.

Secret of Marketing of Bikkuriman

How Bikkuriman made such a big hit?

Actually Bikkuriman faced a matter of existence before it became a big hit in 1985.

Original Bikkuriman or Dokkiriman were released in 1977 and it sold well first.
They focused on sticker instead of wafer and certainly it was unique sticker with a concept of Dokkiri.
It caught the hearts of children but child gets accustomed to new things soon as you know and it is not Dokkiri or surprise anymore.

Its sales had been dropping.

And when Bikkuriman faced a matter of existence, Lotte made a new strategy.
That is taking in holographic sticker and making a story for sticker.
That is their last challenge and they released new series Devil VS Angel series in 1985.

It made a big success as a result.

This holographic sticker was very rare and child kept buying Bikkuriman until they hit Kira.
It was really easy to see what is win and what is lose for stickers and that easiness was also good for child.

I would often sag my shoulders when I got Devil. T _ T

They didn’t stop there and collaborated with TV and Comic next.
Bikkuriman became anime and you could see and watch in anime magazine called Coro Coro Comic or on TV.

It increased the sales of Bikkuriman and made it more popular.

In Around 1990, at its peak, it made sales of 400 million a year in Japan.
Lotte was confectionery maker and confectionery maker usually focus on quality of its sweet but they really focused on its sticker bonus instead.
It might be an uncommon way in those days.
But that’s their strategy and made such a big hit.

Oh, I have to add actually Bikkuriman wafer also tasted very good when I looked back on the time.
It was not because bad taste of the wafer for children threw away it but because children were too attracted only to the sticker bonus.

Bikkuriman has been getting attention little by little nowadays although to make that big hit again might be a bit difficult.

It collaborated with famous 3D idle Hatsune Miku and video game Monster Hunter in 2013.
In 2015, it releases Bikkurimas sticker of Star Wars.
Those new collaboration certainly caught the hearts of new customer and collector.

But now its price is about $1 and not cheap like it used to be.
Still it might be good to buy it once in a while and enjoy win or lose remembering in those days.

I was also one of the children who were into it in late 1980s.
30 cents was reasonable price to kids in those days.

I would often run into the super market, holding coins in one hand, that stood next to my house.

Some of my friends had hundreds of stickers and bundled them with rubber band.
I often wondered how they could get that much stickers.
I also wanted to bundle mine but as I couldn’t buy or collect many of Bikkuriman that not enough thick to bundle my stickers.

And I might be a bit slow child, I attached some of them to desk or things to which it can attach, haha.
Most children never do attach stickers as they are their precious collection.
Anyway I enjoyed it that that’s OK (I encourage myself).

Do you have something you were into when you are little?
It you have, it must remain within you as one of the good memories of childhood.