I introduced traditional summer food “Somen” before.
So this time, I pick up popular Japanese desserts.
Not only the taste but its looks is also beautiful and makes us cool down. 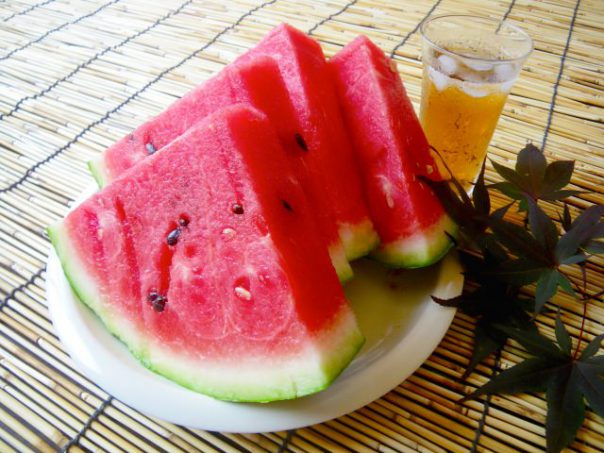 Suika is watermelon.
When summer approaches, watermelon also comes to appear.
You can buy whole watermelon for $13 to $18 at supermarket in Japan.

When family members or relatives come together, we split it and enjoy together.
People also enjoy watermelon during the game called “Suikawari”.
It is the game to smash watermelon on the beach and the man who smashes the watermelon is blindfolded with a towel or cloth.

If you want sweet watermelon, one of the judge points is the sound it makes when you knock it.
If it is sweet one, it makes low sound but if it makes high sound, that is not so sweet one.

I often heard the story from others and I often knocked it.
But bad point of me was I often forgot which sound was sweet so after knocking watermelon I just wonder “Which was which? and stand in a trance. 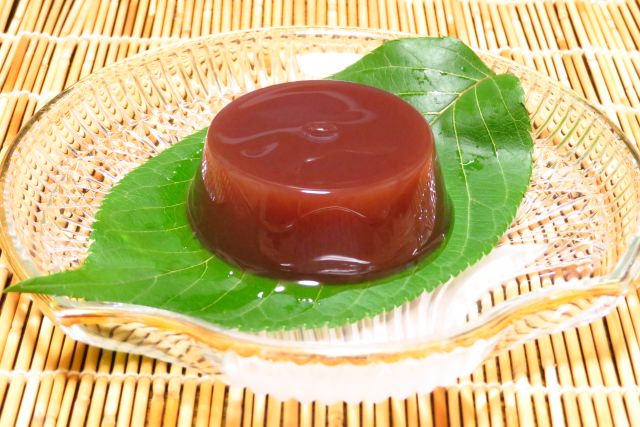 Have you ever heard of Yokan?
It is a traditional Japanese sweet made with red bean paste, agar and sugar.
Not only in summer but in all season you can enjoy Yokan.

But the Yokan I picked up here is Mizu Yokan so not ordinary Yokan.
Mizu means water so this Mizu Yokan is a sweet especially for summer.

The difference of Yokan and Mizu Yokan is the taste and its easiness to eat.
The amount of sugar, agar, red bean paste used in Mizu Yokan are less than in Yokan.
I feel Mizu Yokan is a bit watery in a positive meaning and easy to eat.

When you cool it down in the refrigerator, the taste becomes much better.
I like delicate sweetness of Mizu Yokan. 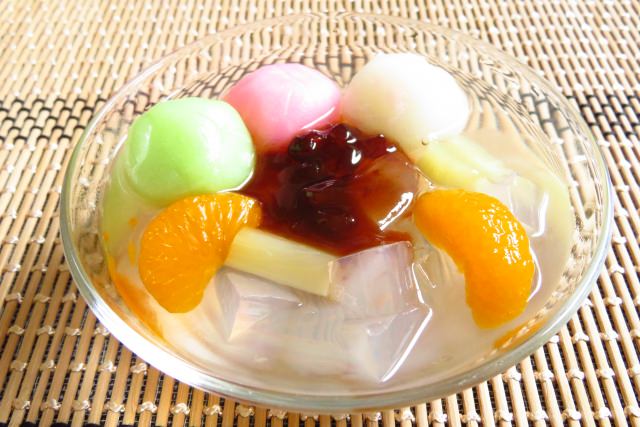 Anmitsu is a sweet made with diced agar, red bean jam and some fruits.
Depends on the type, it also has ice cream and rice‐flour dumplings.

This is also traditional sweet loved by, especially elderly people since old days.
It often comes with brown sugar syrup so you put it on before you enjoy it.

This is certainly very sweet with red bean jam and brown sugar syrup but I like it very much.
It goes well with tea, so I recommend you to enjoy it with green tea or Matcha. 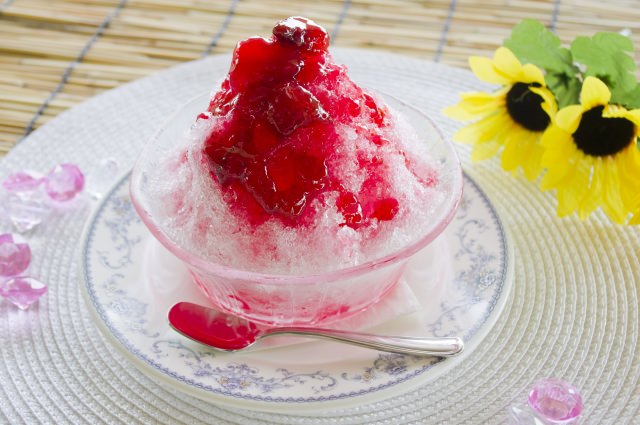 I think most people know this Shaved Ice.
As you already know, it is made of ice and syrup.

But depends on the shop, the price and quality vary greatly.
Because special shop of Kakigori does not use ordinary water but selected natural water and they also take care of shaving.

Usually you can buy Kakigori at about $3 to $4 at festival but it costs you $7 to $10 if you have it at special shop.
Some popular cafe or restaurant have a long line of people and you have to wait more than 1 hour to enjoy it sometimes.

I was surprised and you also must be surprised!
For Kakigori, more than 1 hour in the sweltering summer!
But I think long line of people looks like one of the Japanese cultures and people might enjoy the waiting time itself.

I once watched special Kakigori shop in Chichibu city in Saitama Prefecture.
To my surprise, they were cutting off big ice made in the mountain outside.
Certainly Chichibu is the area blessed with nature such as river and mountain but I thought they use natural water or spring water.

This shop has also long line of people who wait 1 to 2 hours in summer but it might be worth it! 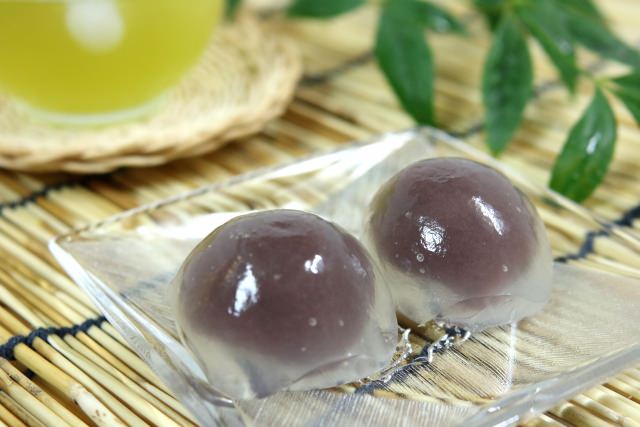 It is made mainly with bracken powder, sugar, red bean paste and water.
Depends on the type, it contains fruits or use agar instead of bracken power.

I think Mizu Shingen Mochi became famous in overseas a couple of years ago.
It is also one of the types of Mizu Manjyu.
Its looks is very beautiful like a raindrop.
Certainly a perfect match in hot summer! 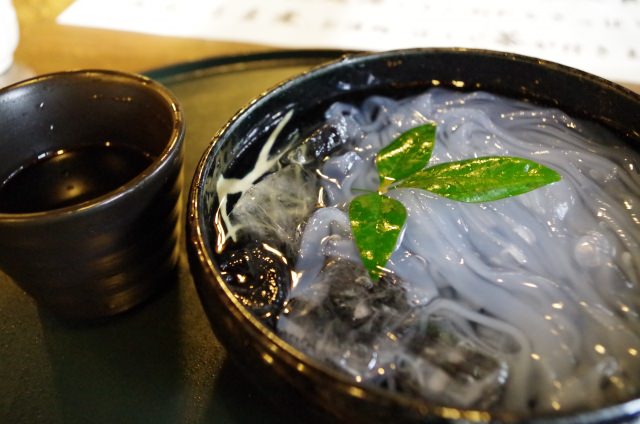 I really like this Kudzukiri!
It is made with arrowroot Starch.
You eat it with brown sugar syrup.

Like shaved ice, the price varies depends on the place you eat.
Actually making arrowroot Starch takes a lot of time and effort that the price becomes expensive naturally.
So shops using potato starch instead of arrowroot Starch have been increasing recently.

But I recommend you to eat it at the shop that use 100% arrowroot Starch.
Actually it is expensive and I myself had Kudzukiri at a traditional Japanese restaurant once.
I think it costed me more than $10 for a small portion but the taste was so good!!

One of my favorite desserts I can recommend with confidence!! 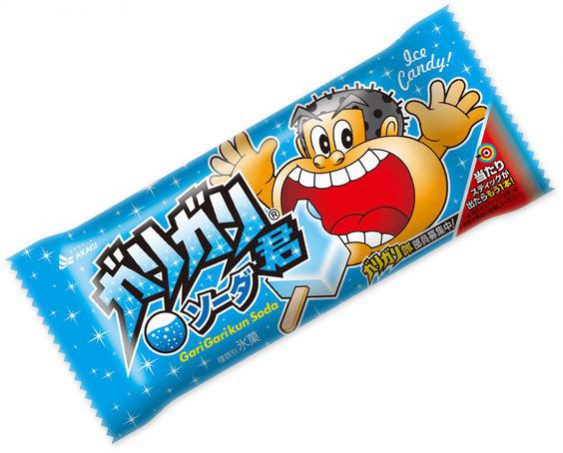 Gari Gari kun is not like traditional sweet but I picked up as I privately like it and I want you to try it if you visit Japan.

Gari Gari kun is Ice Popsicle and so many flavors from coke to soda, pear, apple, etc.

While many new ice creams finish their role, Gari gari kun sells well more than 30 years and that proves its popularity among Japanese people.

Good point of it is it is cheap, you can buy it at $0.75 now but I remember I could buy it at just $0.5 about 25 to 30 years ago.
Another good point of it is you can have the chance of winning another one if you are lucky.
I think I won more than 10 when I was kid (Although I buy it even now, haha)

For most Japanese, speaking of Popsicles, Gari Gari kun!
Gari Gari kun is such a famous and popular Ice Popsicle in Japan!

To tell you the truth, I think the sweetness of red beans, or Anko is not familiar to people in overseas.
Because the sweetness of it is not like that of cake you imagine.
It has unique sweetness and some people might feel it very sweet.

Actually I did not like the sweetness of red beans when I was little so most of the traditional sweets such as Yokan, Anmitsu, etc. were not my taste.
But somehow once I got used to it, I came to really like these traditional sweets.

So I hope you also keep trying even if you feel first like this is not my taste.
Once you get used to it, I’m sure you also come to be a big fan of these traditional sweets in Japan like me.

In the middle of the summer, I often lose appetite but there is always room for dessert!!

« Pointing out Faults of a person? From My Recent Experience
What is Obon? History and Wish contained in Bon Odori »