HOME > Culture > What are Soba Noodles

What are Soba Noodles 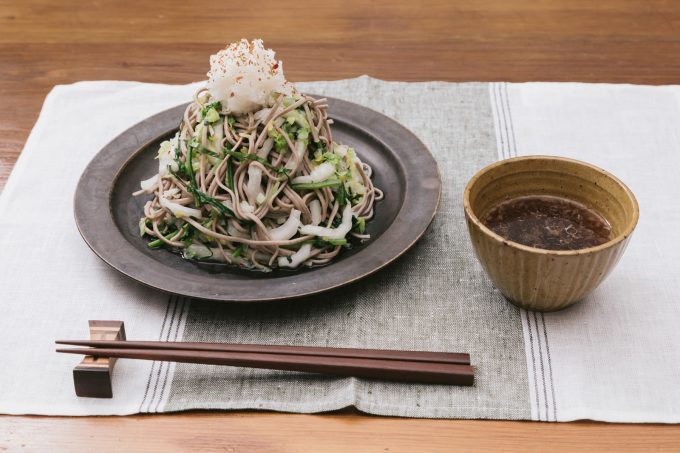 History of Soba is very old.
From the analysis of DNA, the origin of Soba plant or polygonaceous plant is said to have been in Yunnan Province in China.

They say pollen of Soba was first found 9000 years ago from the relics in Kochi Prefecture in Japan and people started growing Soba since then.
Seeds of Soaba is also found 3000 years ago in Iwatsuki Ward in Saitama Prefecture.

It seems like its very origin is China and Soba we know today was made and grown in Japan 9000 years ago.

Things related to Soba is also written by the Emperor Genshou in Zoku Nihonki in 797.
She instructs people to prepare Soba and wheat because of a shortage of rain in summer in those days.
Soba seems to be already common plants among citizens in those days.
But we can find it was not like a main diet from the instruction of the Emperor.
It seems to be grown as a kind of emergency food as it grows well even in the dry land.

Soba was not long noodle first.
It was just a dumpling of buckwheat.
It was called Sobagaki or Sobamochi in Japanese.

Actually even making this Sobagaki or Sobamochi was not easy thing if they used their own hand as Soba had a hard shell outside.
They made use of the power of a water mill to grind it.
It is disused old technique now but they used power of nature to make Soba in those days.

Today’s long noodle Soba first appeared in the book was in 1574.
In the book Jyoushouji Bunsyo, long noodle soba appears first time that was made by a man called Kinei.
Kinei received Sake Cup Tokkuri and Soba sag as a gift for repairing Buddhist temple Jyoushouji in Kiso in Nagano Prefecture.
And he made long noodle Soba in return.
Fuzokubunsen document edited in 1706 also says long Soba or Sobakiri spread around Japan from Shinanokokumotoyamajyuku, that is, from Nagano Prefecture.

First popular Soba shop was opened in Edo or Tokyo in 1789 by Kiyouemon who was once a peddler in Nagano and lived in Edo.
Sarashina Soba he made was direct sell from Shinsyu or Nagano that attracted people in Edo and got popular there.

Because soba’s shape is thin and long that means longevity.
People wish to live long, so they take in longevity by having Soba at the end of the year.

Then you might think how about Udon?
It is also long.

Originally goldsmith used Sobagaki to collect gold or silver.
They pushed sobagaki on to the place a powder or dust of gold and silver splattered and gathered gold and silver.
When they put the Sobagaki into a small wooden tub filled with water, the Sobagaki dissolved in the water and only the powder of gold left at the bottom of it.

So original Soba was also used to collect gold.
That is, eating Soba means economic fortune and prosperity in business.

Year-End Soba is a kind of must-thing in Japan

Many Japanese eat soba just before December 31th ends.
As I wrote above Soba has meaning of having longevity, economic fortune and cutting hardships.
It is considered to have Soba at the end of the year is good.

But why at the end of the year?

But when I was young I didn’t know the meaning and correct time that I often ate Soba just after midnight, I mean on the new year.
And now I rarely eat Soba at midnight at the end of the year because I’m just not hungry at all at midnight.
It is also a bit effort to preparing Soba at midnight from the first that some people eat just cup soba noodles by boiling water.

Either way this is a kind of culture at the end of the year whether one believes it or not.

Soba is a Healthy Food

Soba is said to be one of the low GI foods.
This Glycemic Index shows the speed of rising of blood-sugar level.
It is said that the lower the GI gets the gentler its rising speed becomes.
That means release of insulin which makes fat becomes less for low GI foods.

Red wine is famous for containing polyphenol and Soba does.
It said to have been Soba is the only grain Polyhenol has.
It strengthens capillaries and has an antioxidative effect.
Antioxidative effect means it removes reactive oxygen.

Actually this reactive oxygen is not a bad thing but works bad when it is increased too much in our bodies.
Our bodies have eliminating enzyme originally but the strength of it weakens with the age especially after 40.
Taking Rutin of Soaba helps removing extra reactive oxygen.

Good point of it is its quality.
It includes essential amino acids.

We can’t make essential amino acids (We can make other amino acids in our bodies) that we need to take them from outsides.
Protein in Soba includes abundant amino acids.

How does an authority on Soba eat Soba?

These 3 things are famous when we eat Soba leaving the matter of we really do it or not aside.

Yes, I understand it I might be enjoying the taste of dip rather than Soba itself.
I’ll try dipping a third of it next time.

Second one is not chewing Soba.
Actually this is impossible for me more than the case of dipping a third.
Looks like enjoying the its scent and smooth sensation when swallowing.

But I can’t enjoy most important taste if I don’t chew it!

Thirdly to make a noise when eating Soba.
I think this is common for all noodles such as Udon, Ramen, etc. in Japan.

Actually we just don’t have the custom of having noodles without making noise.

But there is also a reason for it.
When slurping the noodle, we also take in air at the same time.
With the air, scent of Soba spreads in the nasal cavity and that adds the taste of Soba even more.

These are I think famous things when eating Soba.

Soba is one of my favorite foods.
Because it is tasty and I can finish eating it in a short time.

You can enjoy Soba everywhere in Japan.
And if you go to a quick stand-up Soba shop you can enjoy Soba about 300 Yen, it is about $3.
If you add extra such as tempura, of course it becomes $4 or $5 but still not expensive.
And if you like spicy taste you can use Shichimi Tougarashi or seven flavor chili pepper on the table.

Soba is usually served within 5 minutes in that kind of cheap Soba Shop.

I was once worked as a part-timer in my early twenties at Soba Shop in Tokyo and the shop looked like “The Soba Shop” and was not cheap like a quick stand-up Soba shop.
It was really busy job but it was good I could enjoy Soba for free at lunch.

But I’ve also learned that eating same food everyday makes me tired of the food even if it is the favorite food.
This 2016 is ends in 10 days that I might eat Soba this time at the end of the year.

« How to make Japanese Rice Cakes
How does Japan celebrate Christmas? Facts and Origin of Japanese Christmas »