How to make Japanese Rice Cakes 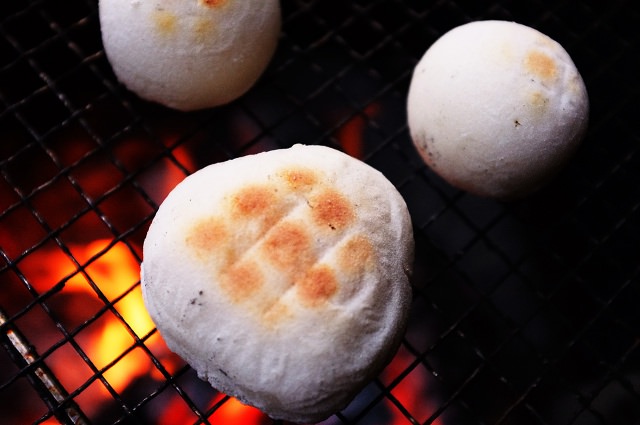 Winter is the season of people enjoy mochi in Japan.
There are many types of mochi from salty mochi to sweet mochi, even mochi ice in Japan.

In old days people made mochi by hand using a mortar and a pestle.
But people rarely make mochi by hand nowadays because there are many shops that sell mochi.
And there are no time to make it or no place to hold big mortar and the pestle in the house.
Only local places or in some winter festival we can see people making mochi by hand.

Here I introduce how to make mochi in old style and modern style using modern cookware.

This recipe is not for the recipe to make mochi itself from the first but how to cook mochi.
My mother told me how to make it like she had been told by her mother.

Mochi which made were preserved as Mizumochi in the old days.
You can not eat all the mochi at the same time but if you leave it as it is, it cracks and mold grows on the surface in the course of time.

There was no refrigerator to preserve food in the old days.
So people soaked the mochi into the water that it can keep good state.
Water is called Mizu in Japanese that this was called Mizu Mochi.

And my mother told me how to cook using this Mizu Mochi.
I think this is my grandmother’s way of cooking Mizu Mochi that it is a one of the cooking ways.
But I guarantee the taste!

Where to buy Japanese Mochi

You can buy mochi anywhere if you live in Japan.
But mainly supermarket.
You can buy good quantity of mochi less than $5 dollars here.

You might find mochi at import food shop in your country, too.
If you don’t have that kind of shop you can buy this SATOU no KIRIMOCHI from Amazon.
This Satou is a famous brand of rice in Japan but I didn’t know they sell mochi in overseas.

You can also by this Hakubai Sweet Rice from Amazon if you want to make mochi from the first.
I think this mochigome is made in US as I don’t know the maker Hakubai here in Japan.

Or you might find Mochi at organic super in your country as while I travelling abroad I found some rare food in Japan at organic shop.

I think there might be some people who don’t like mochi, especially for people in overseas, it is not the food getting used to because of its stickiness and its texture.
But it is really tasty if you cook it using your favorite flavor as it itself is plain taste.
Sugar, salt, chocolate, I think anything is fine as long as you enjoy it.

It might be good to eat mochi cutting at small sizes.

Winter is the season people enjoy mochi with family in Japan.

« New Year’s Eve Omisoka in Japan
What are Soba Noodles »