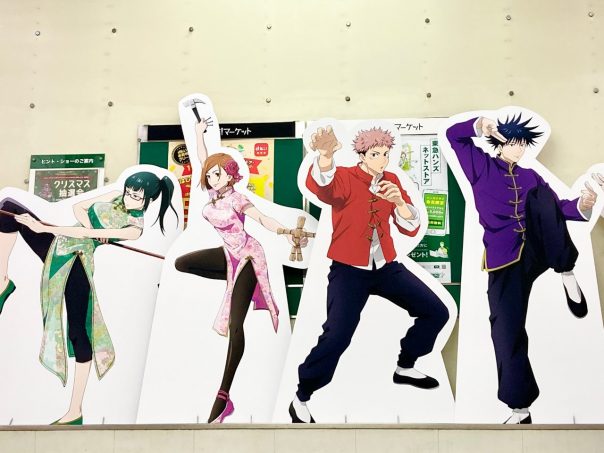 I think many of us spent a lot of time indoors.
I know that most of us want to go outside freely but let’s see things positively.

There are many new anime that start or just started this winter in 2021, too!
I chose 10 popular anime to watch among them.

There are some 2nd season anime, too!

Let’s check them out!!

PS. You can check complete set of comics of Jujutsu Kaisen here in eBay

As long as I know, this JUJUTSU KAISEN is the most popular anime or manga next to Demon Slayer now.

Jujutsu is a kind of Japanese spell.

This is a battle of humans with special powers of Jujutsu VS Curse.
Each character has each special unique skill.

I watched all the anime and found it interesting.
When I go to anime shops or convenience stores in Tokyo, I often see goods of JUJUTSU KAISEN.

The story starts when the main character was hit by a truck and was reborn in another universe where magic exists.
The main character lived as a shut-in for almost 20 years and could not find meaning to live.

But when he was reborn in a totally different world and learned magic there, he started to feel he might be able to do something in this new world.

I remembered Re:Zero when I watched this anime as Re:Zero also had the same start.

There are now many comics or anime of different world.
So far, this new anime Mushoku Tensei gathers attention in anime in 2021.

The Promised Neverland became popular for the sensational story, wasn’t it.

I personally feel like this is the story veganism.
I mean, pigs, cows, hens, etc. live without worries about foods and not knowing their end, that is, killed to be eaten by humans.

It also became a live-action movie this year and is on the screen right now.

I wanna watch it!

And Season 2 was also released!

Are Ema and all the children ever able to escape the orphanage and the world surrounding them?

Thank you for all the love and support. We’ve enjoyed reading your comments of episode 1!

If you like science and trivia, I recommend you Dr.STONE!

All the humans harden into stone suddenly and about 3700 years passed.

Then, just a few people awake suddenly from the stone but the world is completely different.
Artifacts humans made disappeared and what they saw was the world of the stone age.

Using the brain, the main character Senku and his friends open the way to survive the world.

Not just for a fun but for the study you can enjoy this Cells at Work!

The set is inside our body!

But this time the set they work is not inside an ordinary human body but an unhealthy human body.
Yes, they have to work under a tough condition, that is, black, we Japanese call it.

Can they survive and protect under such a condition?

Recommended anime for everyone, especially in today’s world as we all have to take care of our health more than ever now.

Kemono were living with humans but were taking good care not to be noticed that they were not humans.

Many Kemono did well and adapted themselves to human society without problem but some were not.

One day, he got a job offer from a woman who lived in a village and met with a boy Kabane, who was born between a human and Oni (Japanese Demon) there.

Kemono Jihen is a new anime and gathers attention now.

I watched a couple of episodes and it was interesting.
If you like JUJUTSU KAISEN and Demon Slayer, I think you also like this Kemono Jihen.

Solo camp is becoming a kind of boom in Japan due to the coronavirus and this Laid-Back Camp!

This is not a story of professional campers but as the title says it is a story of Laid-Back style camping high school girls enjoy.

Still, they sometimes offer us useful information about camping.

Thanks to the popularity, now season 2 started!

I personally like the voice of a pine cone or a chestnut.
They sometimes appear and say “Konnichiwa (Hello)” in a so cute voice.

Thanks to this anime, many sacred places were born and look like many people visit there as an anime pilgrimage.

If you wanna enjoy laid-back light anime, I recommend you this Laid-Back Camp△.

Re:zero was one of the first and popular anime of reincarnation in another universe.

The main character Subaru was a shut-in and suddenly transferred to another universe.

He tries to do his best but fails and dies.
But he restarts his life repeatedly at a certain point of his life and corrects his destiny.

There was a point he got a bad manner, character and gave up everything due to the tough destiny.
But here Rem, I have to say the most popular character of Re:ZERO, supported and led him to the right way.

It was a really touching moment when Subaru asked her to run away with him forever, but she did not accept the offer although she loved him so much and imagined happy life with him in the future.

Because she found that Subaru was really suffering and making a bad decision.

This Re:zero is not a light anime but sometimes heavy still I recommend you if you like thought-provoking anime.

That Time I Got Reincarnated as a Slime Season 2

That Time I Got Reincarnated as a Slime is also a story of reincarnation and became very popular in 2018 and 2019.

I could see many figures of the main character Rimuru in Akihabara.

An interesting point of the story was he reincarnated as a Slime as the title says.
Certainly, it was very weak but had a great ability to absorb the enemy’s skills.

So he became really strong and almost no one could defeat him.

Reminds me of superhero Saitama, haha.

Now the season 2 started this January.
Do not miss it if you like anime of reincarnation in another universe!!

That Time I Got Reincarnated as a Slime Season 2
Website : https://www.ten-sura.com/anime/tensura

To introduce in this blog, I watched this Non Non Biyori and found it interesting.

What a peaceful anime!!
And sometimes surreal and hilarious!!

The story goes on in the countryside.

Just 5 students in the school!
What time period is that?

Any big events don’t happen but somehow it would make you keep watching like I did.
Only one point I want to say, please include and speak to Suguru more!

If you like a peaceful light anime set in the countryside, I recommend you this Non Non Biyori.

I think more than half of the anime is season 2.

So far, JUJUTSU KAISEN is the most popular.

Now we have more time to spend at home, so we can enjoy more anime.
It was great at least we have internet in this era as we can stay connected online.

Let’s warm our heart in winter by enjoying anime in 2021!!