How does Japan celebrate Christmas? Facts and Origin of Japanese Christmas

Christmas in Japan is different from those in abroad.
Such as having a chicken of KFC and a cake.

To begin with, there are not that many Christian here in Japan.

Then why people in Japan celebrate Christmas?

I introduce the history and difference of Christmas in Japan here.

History of Christmas in Japan

The oldest history of it goes back to 1552.
That’s the year Japan first met with Christianity by a preacher of the Cross Francis Xavier.
He introduced Christianity to Japan first.
And Christmas had come to celebrate in some places on small scale in Japan.

When the time comes for Meiji, the prohibition of Christianity was lifted in 1873 and Christmas also came to being held again.

And first big prevalence was made by supermarket Meiji-ya in Ginza in 1904.
Meiji-ya placed Christmas tree in front of the shop as a display for the first time and it attracted people’s attention.
It also sparked the sales war of Christmas.

And next big event related to Christmas was made by Fujiya.
Fujiya is very famous cake shop in Japan and you may know the its cute mascot Peko-chan.
Fujiya made a special fancy cake for Christmas in 1922 and it also got attention of people.
But it was very expensive cake for ordinary people that it was after about 1975 people could afford to buy this type of fancy cake.

In 1919 Teikoku Hotel held Christmas party for the people and theme park, shops also take Christmas into their business that prevailed Christmas all over Japan.

There was a time Christmas became less popular because of the WWII but it got its popularity again after the war.
I think ordinary people came to enjoy this kind of Christmas today is after about 1980.

What do Japanese eat for Christmas

I think people usually eat ham or turkey in overseas but main dish of Christmas in Japan is chicken of KFC.

Off course not everyone but people certainly buy chicken of KFC and KFC makes profit on Christmas.

Actually I myself remind KFC for food if Christmas comes.
I think big reason of it is all because of strategy of KFC.

They did good research and marketing for Christmas and established the image of chicken of KFC on Christmas.

I have memories of watching KFC commercial on TV often when winter comes around.
It certainly looked good and well made.

KFC is something like McDonald and people can go buy anytime but they make special one for Christmas and already made a big image on us.
I can say the reason people enjoy KFC is all because of strategy and marketing of KFC.

Fancy cake is also only in Japan I think.
People in overseas usually enjoy other sweets on Christmas such as cookies, bûche de Noël, apple pie, etc. depend on the countries.

But in Japan, fancy cake is the must-thing on Christmas.

It might be rare but when it came to appear on Christmas?
As I introduced first, it is said that Fujiya was the first that made special fancy cake for Christmas.

He was the founder of the confectionery giant Fujiya.
The original of fancy cake was made and prevailed by Fujiya.

I think he had already been to US and knew the effect of Christmas has that he came up the idea of associating this fancy cake with Christmas.

Like KFC this is also business marketing of Fujiya.
And it made a big success.

Anyway I think it is good thing people can enjoy the moment with good foods and sweets like now.

Christmas is the time for couples

Usually people in overseas spending time with their family on Christmas.

But in Japan, Christmas is for couple rather than for family.
If the family has little kid, they enjoy Christmas all together but when the child becomes a high school or a college student, the child chooses to spend the time with a girl friend or a boy friend alone in Japan.

And I sometimes hear people who don’t have a girl friend or boy friend feel lonely on Christmas.
You might think they still have their family but for young people or people in Japan Christmas is more of for couple than for family.

But why Christmas came to have the meaning of for couple in Japan?

Actually I researched it but couldn’t find main reason of it.

But I think popular song for Christmas, business marketing of company and the “bubble” economy in those days in Japan made it the image of for couples.

TV commercials and hotels also created image for couples.
1980s was the time of bubble economy in Japan that people had money to spend.
People booked expensive restaurant, hotel and some clubs became full of young people.
I think all those factors mixed with and created the image of Christmas is for couples.

In the first place, why Japanese people celebrate Christmas?

I think this is the most big why for the people in overseas.

Why Japanese people celebrate Christmas while they are not Christians?

This is my opinion but I think people just like big event and just like following.
As you know Japanese religion is Shinto and Buddhism but actually people, at least almost all people around me, don’t so much care about religions.

I think countries in Christians, Christmas is not only a big day but people pray, appreciate and think of the meaning of it.

But in Japan, population of Christian is less than 1% and most people are not belonged to any religions.

So for most Japanese, Christmas is a big event simply enjoy the beautiful atmosphere and dinner with family or special one.

I cay say Christmas in Japan is another Christmas in countries of Christians.
But I think it is not bad thing because this kind of generosity for things created Japan today.

Christmas illumination is beautiful.
This 2016, I took some pictures of them in Tokyo before Christmas.
I went to Tokyo (Tokyo station), Roppongi, Shibuya this time. 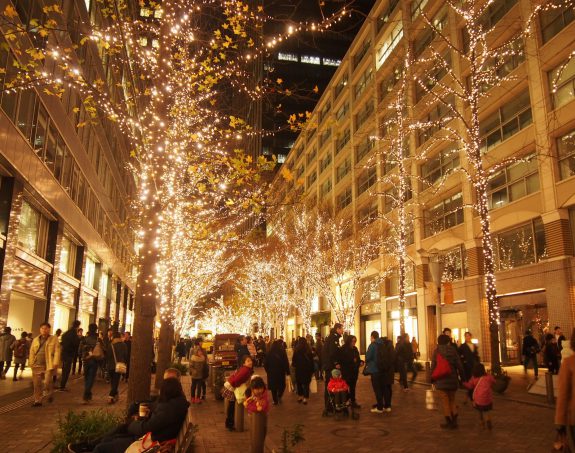 This is Marunouchi 2 or 3 minutes from Tokyo station. 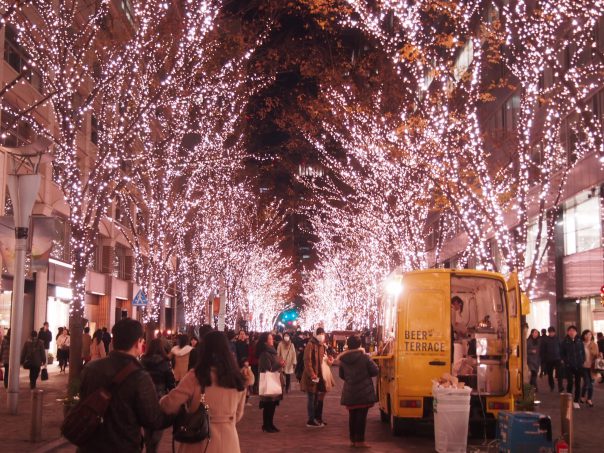 There were some vans for food and drink, too. 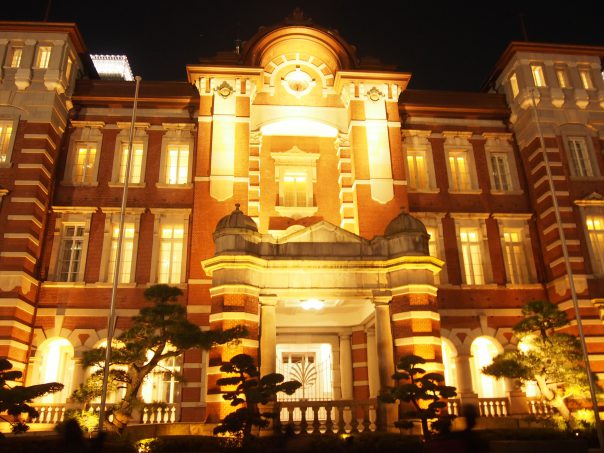 This is not relevant to Christmas illumination but I took a picture of Tokyo station as it was beautiful at night. 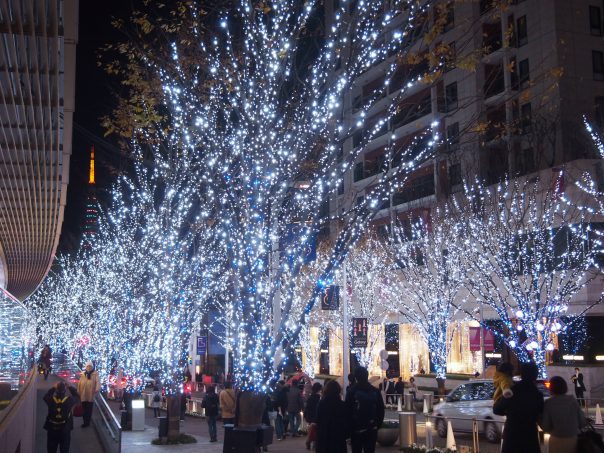 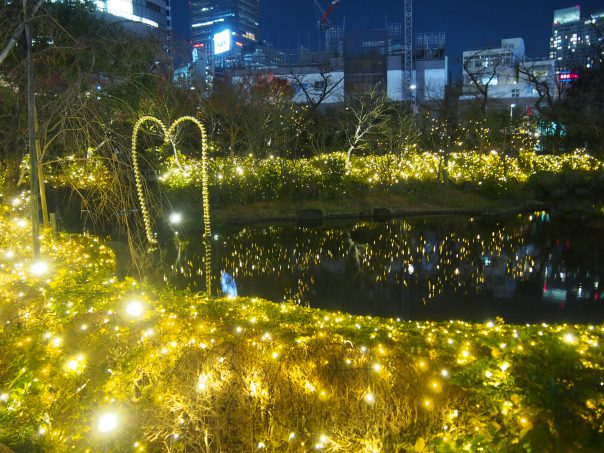 Beautiful yellow lights were shinning around the pond.
Its color changed into green when I leave. 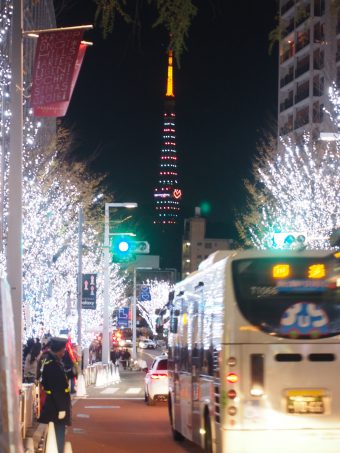 Tokyo Tower was also beautiful with a special decoration of heart mark on it. 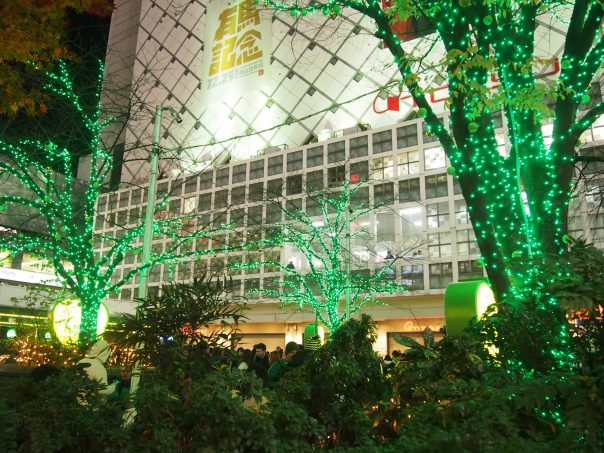 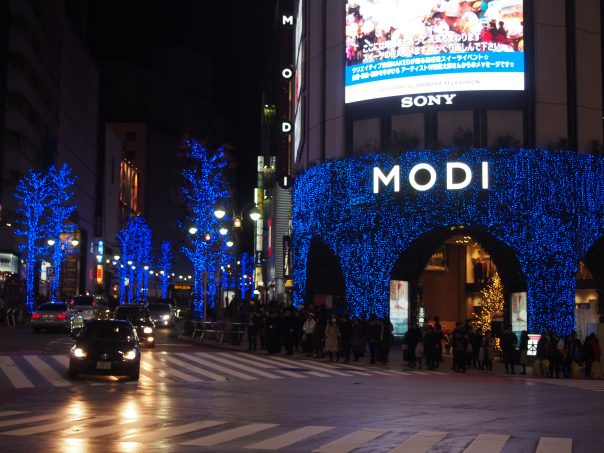 Here is the start point of Blue Tunnel. 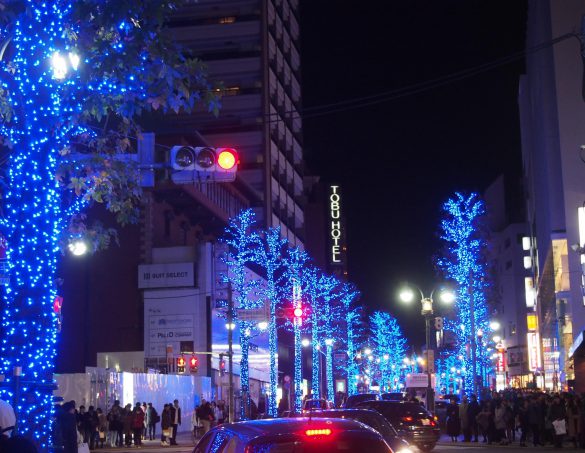 It stretched into the far distance that I returned in the middle.
It was beautiful Blue Tunnel.

My image of Christmas is a happy and warm.
I have memories of decorating Christmas tree with my mother just before Christmas and it was really fun to me.

Fancy cake was tasty and when I woke up on Christmas there was a present from Santa Claus next to me.

Although I’m not Christian and think the day is just another day to me but I like the happy atmosphere Christmas has.

When I was a kid I was on the side of receiving present but now is the side of giving present.
Christmas might be for adults for giving something with the thought or thought itself for someone and something special.