HOME > Anime > Koe no Katachi : Manga about a Deaf Girl

Koe no Katachi : Manga about a Deaf Girl 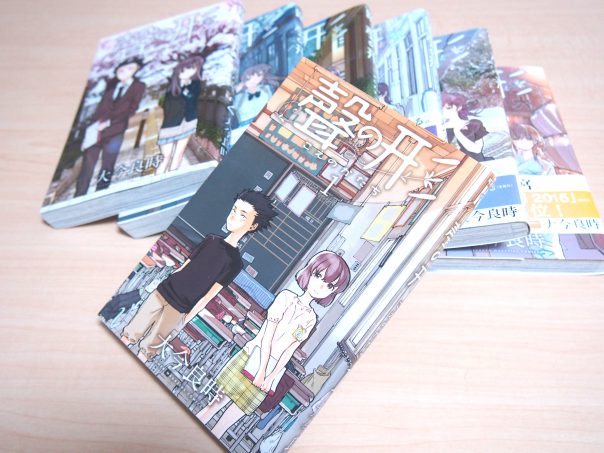 Have you ever been bullied or you were the bully?
Or were you one of those who just ignore and stay away from those issues.
Were you able to listen to Koe in those days?
Or even now, can you listen to the Koe of others properly in your heart?

After I read all the episodes (This Manga became Anime movie later but I only read Manga this time), I felt adults also have to read this manga as the deep theme (I don’t say it bullying) is actually even common for all the adults, too.
This is not a manga which just focus on the superficial issue of bullying, which people can see, towards a deaf girl but the real theme is even common to all the people.

I think many of us have to face gut-wrenching memories when reading this manga but I still think all the people should read this manga.

For this article, I update it every month like volume 1, volume 2, volume 3, with summary or my impression on each volumes.
So if you are interested in, come back here and check now and then.

I can say most Japanese could not read (except for elderly people) this Chinese character “聲” when it first appeared as we did not learn this difficult old word in school.
It is read “Koe” and we usually use “声” instead.

Why the comic writer used this very difficult word which almost no one can read?
There was a certain reason for it and after I understood it, I also thought this “聲” was the most proper Chinese character.

As I said before “声” is the word we usually use, rather this is the only one we use in daily life.
It means voice in English.
Deaf girl and she can not hear this “声”, easy to understand.

In English voice is voice, no more or less for the meaning.
And Japanese “声” is also, “声” is just voice and that’s it.

The reason Koe no Katachi had been passed publishing first

Yoshitoki Oima is the comic writer of Koe no Katachi and he entered new face award of weekly shonen magazine in 2008.
This weekly magazine is very popular comic magazine that had many popular manga such as Fairy Tail, Attack on Titan, Seven Deadly Sins, etc. since old days.

Koe no Katachi won the 80th weekly shonen magazine new face award of Manga in 2008.
But its editorial department passed to run it in the magazine in the end.

Why they did pass Koe no Katachi in spite of its winning of the new face award?

The stuff says like this.
“Everyone has something weakness when we born or has something which we can not conquer no matter how hard we tried. Everyone has it and to draw that kind of Manga also makes not positive work which can not convey hope for the readers. Deaf, the disability of Heroine is the exact example of it so we passed this Managa”.

After long discussion in the editorial department, one-shot comic of it was published.
It was 4 years later since the first winning of new face award of Manga.
Since then, Koe no Katachi became popular Manga that won various prizes.

But actually the essence of the bully was same whether the person has a disability or not.
People make fun of weakness of the person and it someday escalates without limit.

There was a girl who told she helps Shoko who is a deaf girl but the classmates started talking behind her back saying “She is pretending good girl”, “She is appealing to the teacher”, etc.
She refused to go to school since then.

This is the typical case of bully.
If the one try to help the bullied one, there is a big possibility of being bullied together by the bully.
People who don’t bully also afraid of that so they don’t touch the bullied one and just stay away from the matter to protect themselves.

For teacher, he certainly warned Shoya that not shouting at or making fun of Shoko but his manner was like just do the least things.
He was like he also wanted to stay away from the matter if possible.
And only when principal came appear to ask what’s happening in class, he scolded Shoya seriously.

Actually adult is the key to solve bully as other kids have no power like stopping.
But with this teacher, no solution to the bullying.
The teachers in my elementary school were all more passionate for us so I don’t think this kind of teacher is typical or I hope so.

After Shoya was scolded in front of the principal and the teacher in class.
All the friends who were around him started to ignore him.
Rather they started to bully him such as scribbling on his note and desk, throwing away his indoor shoes, pushing him into the pond, etc.
Most of the things were things once Shoya did toward Shoko.

This is the self-responsibility.
He certainly asked for it.

Shoko was the one who helped Shoya, she picked up note of his spread on the ground to hand it to him.
She tried to wipe the blood of his mouth although that come into fighting with Shoko as he kicked her after all.

But she changes schools by the decision of her parent.
Shoya becomes more and more isolated after graduation, in junior high school, in high school.

He is now a high school student, not kid, and decide to meet her again before he die.
He decides to end his life but before that he felt he had to meet with her again.

He was going to commit suicide after seeing her to make up for what he did against Shoko.
He told her he did not like himself.
Said how happy it would have been if he and she could listen to voice each other.

He said “hurting one another was the only way I could share voice”.

I remember the scene Shoya and Shoko was fighting each other.
It was bad of Shoya to hit a girl but Shoko also hit him back.
Certainly Shoya was the bully but he was also the only one for Shoko to express her real emotion.

They were fighting but they were sharing each real emotions, or Koe (voice) at the same time.

After telling her his real emotion at high school he tod her if he could become her friend in spite of himself.
The moment he said it, he started regretting but Shoko shook his hand.
That’s the answer of Shoko.

He was saving 1700000 yen (About $16000) for his mother before dying.
He also cleaned his room and was checking each date on chalendar.

His mother felt something wrong and trapped Shoya to check if it was just her too much thinking or not.
And he admitted he was going to commit suicide and she shouted by holding all the money Shoya gave her.
“I light this money if you do not stop”
She was crying.

He finally conceded saying “I stop it, I stop it”

She smiled saying “This is our promise”
But she accidentally lit fire on the money.
Both of them were upset.

All the money burnt to ashes.
Shoya disappointed but she says “Don’t be disappointed so much. I also do not want to use money you saved for your death”.
It was really true of her.
For her, more than anything else, Shoya, he keeps living is the most important thing.

Shoya also made friends at school and his name was Ishida.
One day Shoya asked him “What’s the definition of friend?”
He had forgotten what was friend since he became alone until today after bullying.
Ishida said “Do we need definition? I think friendship is something beyond word and reason”

I also agree with his word.
We do not need any definition to become friends.
We become friends without notice.
That is something not defined by word or reason.

Shoya helped his friend for the first time.
He did not run away or ignore like before and helped him.
That made real friendship.

Certainly he was beginning to change.

Shoko’s sister Yuzuru also appears.
Yuzuru was the one who always protected Shoko behind since they were little kids.
She always wondered why Shoko never get angry when she was bullied.
She never saw her getting angry.

But one day Yuzuru posted a picture of Shoya jumping into a river online adding note “Is there anyone who is more brave than I?”
It was the scene Shoya tried to help Shoko who jumped into the river but Yuzuru hated him (I understand because he was the one who bullied Shoko) so she trapped him by using the scene.
Nobody knew the truth and it was bad manner to jump into public place so Shoya’s action took flake.

Shoko got to the truth and that was the first time Shoya saw her getting really angry in her whole life.

I felt Shoko can become serious when things are something related to Shoya.
They might have been relationship of bully and bullied but they kept talking in voices of hearts at the same time.

One day, Shoya told Yuzuru to spend his life for Shoko.
I think that’s his best he can do.
But mother of Shoko told him “No matter how much you try, Shoko’s happiness in an elementary school, which should have been, never come back”

Volume 2 was really good.
At least Shoko accepted Koe (Voice) of Shoya and they started to keep meeting.

Definition of friendship, something important than money, fighting but it was communication, something that can never take back.
I could see many important keywords in this volume 2.

« Why do the Japanese hunt whales?
Tokyo Game Show 2017 Report of VR, Android and Cosplayer »