HOME > Anime > Visited Life-Size Gundam in Odaiba before Taken Down

Visited Life-Size Gundam in Odaiba before Taken Down

I happened to get the news that life-size Gundam finishes its role on March 5 2017 that I went to the Odaiba in where Gundam stands.
I’ve not been to there that frequently until this day.
I just went see the Gundam only one or two times before.
But I felt it was good I could go see it on the last day.
Have a look at the video which I took if you want to know the atmosphere.
I introduce here its history

This Gundam’s real name is RG1/1 RX78-2 Gundam Version GFT.
I myself didn’t know real name but anyway this is the standard one that we know.
The size of it is 18 meters.
It is exact same size of Gundam in anime that it is 1/1 scale statue.
Weight is 38t.
I don’t imagine how heavy it is when it comes to ton.
I wonder how much did it cost to make and set this Gundam.
It looks like it cost about 300 million yen, that is, $2.65 million.
By the way, Takayuki Furuta is the man of Future Robotics Technology Center, Chiba Institute of Technology that calculated all the cost when real Gundam was built.
It looks like costs about 80 billion yen (about $700 million).
This Gundam of 800 billion yen doesn’t include function such as flying, holding human inside.
Just walking still it costs such a big money.
And looks like the legs have to be thicker than those of in animation’s as they can not hold the weight if they are as slim as those of in animation.

When and why is it set?

This Gundam was made and set in July 2009.
Setting place was at Shiokaze park.
It is other place although it is same Odaiba and they are very close.
It was moved to the place where Sizuoka Hobby Fair took place in 2010 with beam saber in its right hand.
And came back to this place in front of Diver City Tokyo Plaza in 2012.
This Gundam was built as a part of Green Tokyo Gundam Project and to commemorate 30th anniversary of release of anime Gundam.
Green Gundam Project is the project of government-private to spread message of Tokyo aiming for urban revitalization with a lot of green and attractive city.

How Life-size Gundam was made?

Do you know the place in where Gundam was made?
You might think, of course in Japan, but it was mostly built in Thailand.
External appearance which had been FPR part was made in a factory in Thailand.
FPR is abbreviation of Fiber-Reinforced Plastics that is made by mixing glass fiber in plastic to promote its strength.
So the original prototype model was made in Thailand and the last process such as painting and finishing was made in Japan.
Looks like it could be made in Japan if skill was the only reason but there was not that big factory in Japan that can produce such a big part for 18-meter Gundam that Thailand was selected for making.
General producer of this Gundam 30th Project is Yasuo Miyagawa from Sunrise inc. and the number of stuffs involved is more than 150 people.
Making and displaying, etc were all made and taken care of by NOMURA Co., Ltd.

The movable part is just neck as long as I see.
The neck turns left, right and looks up.
It also emits light such as from eyes.
Other performance is mist spray.
It sprays mist from the chest part.
Actually I half expected that it might lift the arm but it was not.
Like getting it to walk, even just lifting its arm must be very difficult thing and cost money.
But good thing is when its show time you can listen to the music and voice of real Seiyuu or voice actor. 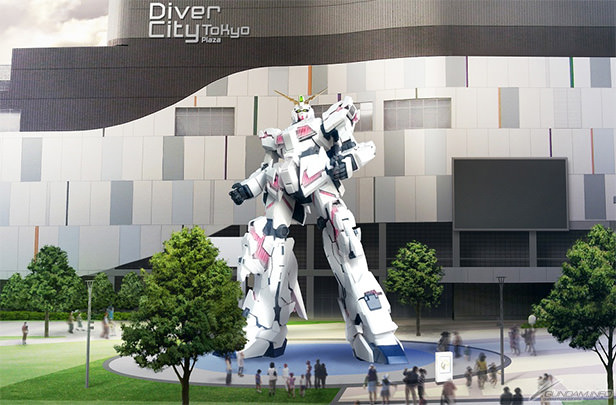 It was not the all the end to take down Gundam.
It has a successor.
It is UC Gundam or Unicorn Gundam.
I could see some comments about this selection of Gundam such as why not Z Gundam, Wing Gundam, Psycho Gundam, Eva (Why eva comes?, haha) etc.
Keyword is possibility, says president and director Yasuo Miyagawa from Sunrise inc..
He was the general producer of Gundam 30th Project and works on this project of UC Gundam as well.
UC Gundam is the symbol of possibility in anime Gundam so that UC Gundam was selected.
He also says this statue of UC Gundam expresses the possibility of human lives in outer space, possibility of humans understanding each others, possibility human has.
I think there are also other reasons such as which Gundam is realistic when it comes to making in real world, how’s the image, business matters, etc.
But I like the image of possibility UC Gundam has.
And I’m very glad as long as I can see Gundam again there.
UC Gundam is planned to stand in the same place in front of Diver City Tokyo Plaza in Autumn 2017.

THE GUNDAM BASE TOKYO Opens on April 2017

Gundam Front Tokyo closes on 5th April.
But new entertainment facility opens this summer instead.
That is THE GUNDAM BASE TOKYO.
It opens at exactly same place as Gundam Front Tokyo in Diver City Tokyo Plaza.
This becomes the biggest Ganpla (Gundam plastic models) facility.
In preparation for 2020 that is 40th anniversary of Gunpla release, THE GUNDAM BASE TOKYO transmits various information about Gunpla.
It has already opened official shop in Korea in 2003 and Taiwan in 2005.
Finally it opens in Odaiba with about 2000 Gundam plastic models.

New project started!
Surprisingly it is all about getting Gundam to walk in 2019 in commemorate with its 40th anniversary.
As I wrote, Yasuo Miyagawa says it costs about $700 million if one makes real one even though it doesn’t fly or holds human inside.
Top of that, the legs have to be thicker than those of animation as it can not stand its heavy weight.
There are many other tough parts to solve to make it real and common sense of Robotic professionals now is “No way!!”
Still like UC Gundam, human always has possibility and made it possible in its history so many times that had been thought impossible.
This project is driven by general incorporated association GUNDAM GLOBAL CHALLENGE.
Supervisor of the mechanism or technique is a professor Syuji Hashimoto at Faculty of Science and Engineering, Waseda University
Its idea and design plan had already been sought from all over the world.
Three Japanese and one Taiwanese got the award and they became member of this dreamy project.
I can’t wait the day Gundam moves!!

There were a lot of people in front of Gundam.
There are Gundam cafe and amusement place there and I was going to buy something but there was a long line of people whole day that I gave up.
Although there is no Gundam statue for a short time, here is must-see place if you are Gundam fan.
Apart from Gundam, here in Odaiba you can enjoy beautiful scenery in front of sea.
I remember I was into making SD Gudam and BB Gundam when I was kid.
I was especially into collecting cards of Gundam and every friends around me were into it as well in those days.
Gundam has so many series and it tells us many things through the theme war.
But it delivers hope and possibility at the same time.
I’m sure to visit here again to see Unicorn Gundam in this Autumn.

PS. Yes, I visited Unicorn Gundam and took a video as well, here is the article and the YouTube!
Full Size Unicorn Gundam Statue in Odaiba Unveiled Finally 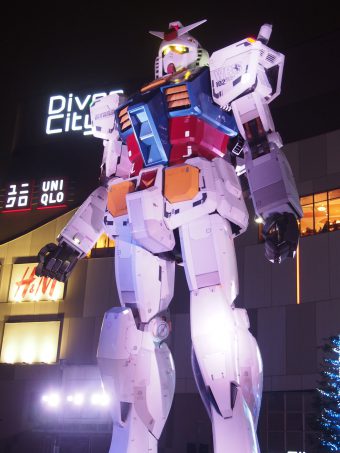