HOME > Culture > What is Ishiyaki Imo (Roasted Sweet Potato)? How to Cook?

What is Ishiyaki Imo (Roasted Sweet Potato)? How to Cook? 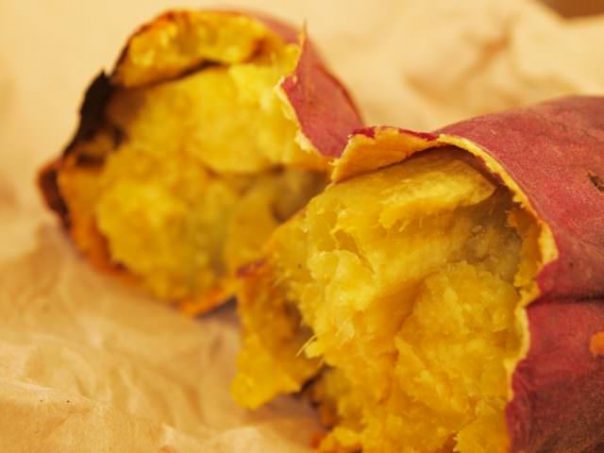 Winter is the season of Roasted Sweet Potato vendor in Japan

Do you know roasted sweet potato in Japan?
When winter draws near, you can hear the sound track of sweet potato vendors in Japan.

Ishiyakiimo means sweet potato roasted on hot pebbles.
The sound and phrase of “Ishiyakiimo, Oimo!” is exactly same over this 30 years as long as I remember.

So many adults have a nostalgic feel when they hear the sound and find them.
It smells very good and people are attracted, especially at night, in the cold winter.

It is one of the seasonal charms of winter in Japan.

Actually anyone can make roasted sweet potato.
But just nuke it in the microwave oven doesn’t make same sweetness like potato vendor sells.

What makes this difference between them?

It all depends on how to roast it and what to use it.
It is also relevant to the elements it has.

Sweet potato vendors use pebbles to roast it.

Sweet potato is mainly consists of starch for its elements.
And sweet potato has an enzyme called amylase.
This amylase has a nature which dissolves starch into carbohydrate called maltose.
By the effect of this amylase, sweet potato becomes sweet.

Then you might think just heat makes tasty sweet potato.
But that’s the difference of sweet potato made in home and made by vendors.

In short, to draw at maximum sweet taste, you need to bake it slowly in a low heat between 60 Celsius and 75 Celsius.

And the pebbles sweet potato vendors use make it possible.
The pebbles can roast sweet potato in a low heat and keep the temperature for hours that activates amylase well and draw its sweetness.

If you use nuke, microwave cooks it in a high temperature for a short time and there is no time for starch changes into maltose that it is not as tasty as the one roasted on the pebbles.

How to cook Japanese Sweet Potato

Following are the ways of how to make tasty sweet potato by yourself.

Cook it in a frying pan

Spread pebbles all over the surface of a frying pan.
Put sweet potatoes that are washed in water, wrap in paper and aluminum foil on it.
Cover a pan and heat them over low or medium heat for an hour or so.
Turn the sweet potatoes every 15 minutes while cooking.

When you could stick it easily without stopping, it’s all done, now it’s ready to eat.

Cook it in an oven

Prepare the sweet potatoes by washing in water and covering like the case of the frying pan’s above.
Then heat it at 160 Celsius for one and half an hour.

Check the cooking condition by sticking the sweet potatoes and finish if it penetrated it without stopping.

Bake it outside if you are not in Japan

This is the traditional way of baking sweet potato.

First you need to gather fallen leaves as much as you can get.

Just wait around it until it is baked for an hour or so, it depends on the heat temperature.
You can easily find if it is already cooked or not by sticking the sweet potato using a twig or a skewer, etc.
If the twig or skewer penetrated it easily without stopping in the middle, that’s the sign of cooking completion.

But nowadays it is hard to get that much leaves to cook sweet potatoes that I recommend you to get enough charcoals to keep it burning.

There might have been people who prepared empty drum in the old days and threw fallen leaves and sweet potatoes together in it.

Note that this open fire is banned in Japan now that please try it if you are in your country after checking the law of your country.

There is even a tool to make baked sweet potato!

I myself saw this tool sold at a variety store the other day in Japan.

I’ve never seen those tools just for making baked sweet potato when I was child.

I think the popularity of baked sweet potato grew, especially over the decade, so this kind of machine started to appear.

I could see several types sold in eBay, too!

Where you can buy Japanese roasted sweet potato?

You can hear the sound track of Roasted Sweet Potato vendor if you walk outside or even from inside house in winter.

They drive around the town with specialized mini-truck very slowly that anyone can catch up.
Some of them are waiting in front of the station at night with their cars that hold roasted sweet potatoes.
Business man, students, etc. are drop by to get it at night before going home.

My memory of roasted sweet potato

It was when I was in elementary school.
I was with my parents in a car at night and came to the shop that sells dairy things.
My parents parked the car in the lot of the shop to buy something inside.
I was thinking I should go with them but didn’t after all and chose to stay inside car as I felt it’s a bit bother.

And when I was almost sleeping inside, suddenly something dropped beside me.

When I get closer look at it, I found it is a roasted sweet potato.

Then I could see a face of a man outside window that is opening.
He told me “I’ll give you!”
Yes, he was a vendor of roasted sweet potato.

I think he happened to notice me, little child staying alone inside car in cold winter, and felt a kind of sorry that he gave me the hot roasted sweet potato by throwing it through the window which was opened upper half.

I really thanked him although I don’t remember his face or what else he said anymore.
Roasted sweet potato, especially the one vendor sells, was not cheap thing, I think it is about $3 or more now, and I liked them that I appreciated him.

In the old days, people baked sweet potatoes outside by themselves in autumn or winter.
Because there are much fallen leaves and not banned for open fire outside in the old days.

People were gathering around it while cooking and talked, warmed their bodies.
It might have been a kind of good communication to know each others.

Now open fire is banned as it is dangerous that you can’t see people baking sweet potatoes outside.
But vendors are still fine with its familiar sound track and phrase “Ishiyakimo, Oimo!”

Have a try if you hear the sound or voice in Japan, as it is really tasty and makes your heart warm as well as your body!