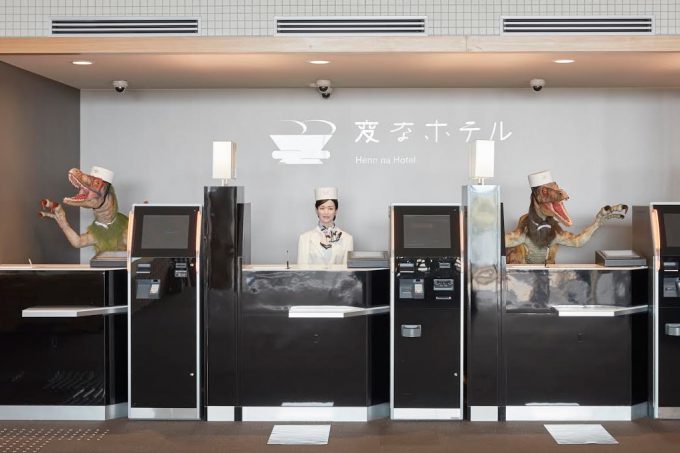 There are 2 types of robots at the reception.
They are humanoid robot and dinosaur ! >_< The dinosaur looks Tyrannosaurus. Yumeko-san is humanoid robot and Mirai-kun is dino robot. Mirai-kun looks like trilingual as it can speak Japanese, English and Chinese. And there is also concierge robot at the front desk. You can ask anything such as what is the best spot to visit or do you recommend good souvenir, etc and it replies to your question. Here at the reception what you do is to talk like that of an ordinary hotel. There are also face recognition systems at the front desk that you can check in by being recognized your face here. It is good as you don't need to worry about your room key anymore that can be lost if you carry. 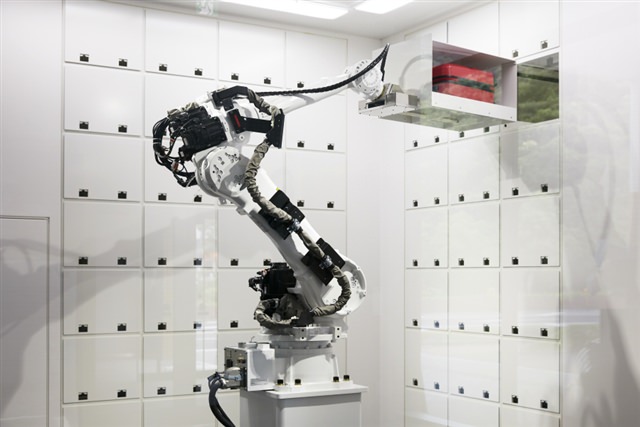 There is a place where you can deposit your luggage near the reception.
Here, it is not the human to take your luggage but robot.
It is armed-robot.
What you need to do here is to register your name and PIN code.
Then you put your luggage in the place where it should be put.
And armed-robot pick your luggage up and put it into the designated locker.
You can use this checkroom 24 hours by 500 yen (About $4.5).
Little pleasure is the armed-robot waves its hand to express bye.
I like this little trick.

You don’t need to carry your luggage by yourself as a porter carry it.
Of course this is also not human but robot.
What you do is put your luggage on this robot and input room number.
Then the porter robot leads you to the room.
Good point of this porter robot is it has censor to sense human body that it leads slowly or stops if you don’t follow it.
That’s a human friendly robot.
It shows you latest information of this hotel with mucis on its screen.
After leading you to your room, it returns to the place where it had been automatically.

You can enter the room by face recognition system.
Inside the room you can find Cyuri-chan.
It is flower-like robot.
I think it is named by a flower Tulip.
If you ask it to turn the light up, it reply and turns the light up.
It also tells you weather forecast.
It can sing a song, too.
Cyuri-chan helps your stay. 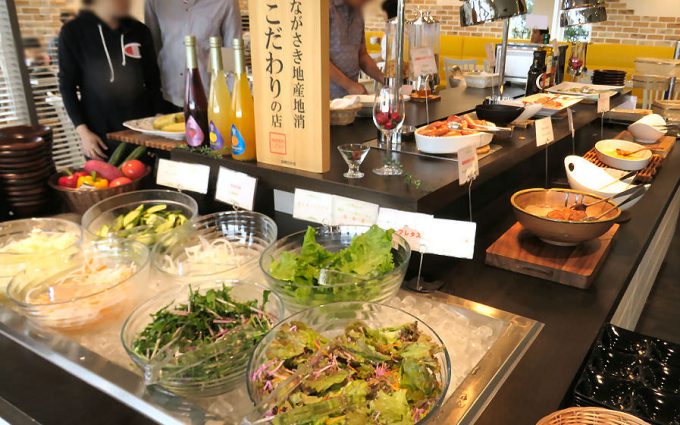 This hotel is not only focusing on robot but Eco-friendly way.
You can see it from the restaurant Aura as it focusing on locally grown vegetables that is grown up without using chemicals.
For energy, it applies latest radiation panels.
Radiation panels transmit heat to the object using microwave without effect by air.
This removes heat of human body when a person feels heat and warms the body up when the person feels cold.
It seems like the differences of temperature is less compared to ordinary cooling/heating system.
It is designed for human to pass time comfortably all season through the year.
This hotel also uses solar panels and hydrogen energy.
It’s the first hotel using hydrogen energy in Japan.
This is all for cut down its emission of CO2.
Cross Laminated Timber technique which makes good use of wood is also applied.

Aren’t there any human stuff?

Actually that’s not.
This hotel is not staffed only by robot.
Because there are some process they can’t do and need help of human.
Like restaurant, they might be able to do main role of cooking but still need help of human for some delicate processes.
Robots of reception also can not reply all the questions which they can not imagine.
And when something unimaginable things happen, robot can not deal with all of them properly.
They do great works still not perfect that need help of human.
So there are 10 people for on-site stuffs at most.
When you need help you can ask real human stuff here, too.

This Henn na Hotel is located in Huis Ten Bosch in Nagasaki Prefecture.
Huis Ten Bosch is a theme park like Disney Land although it is very different one.
It was made in 1992 under the concept of Eco-future city.
There are systems of recycle for water, electric power, garbage and Henn na hotel succeeded the concept of Eco-friendly as well.
And its another main target is improvement of productivity.
It reconsiders the work process and removes the inefficient work and process to offer the hotel at a reasonable price.
I thought this is an interesting idea to value robot or latest technology and Eco society at the same time.

I checked impressions of guests that stayed this hotel and found both good and bad points of it.

This Henn na Hotel opens second one by Maihama station.
Do you know Maihama station?
It is the place Tokyo Disney Land located.
Oh, Maihama, that is next station of my university, that’s useless information, sorry.
But the hotel is located in opposite direction to Tokyo Disney Land.
What’s the difference between the original and here in Maihama.
Robot itself is different.
Tapia sat inside room instead of Turi-chan.
Tapia is AI Robot that can talk and adjust air conditioning as well as turns the light up and down.
Its look is cute like an egg but great AI as long as I checked.
The number of the robot at the reception are just 2.
By improvement of work efficiency, real human stuff there are just 6.
I think there are other difference, too other than those things.
It opens on 15 March 2017.

Henn na Hotel was opened in 2015 and 2 years has passed since its opening.
They say they keep changing without rest taking in latest technology.
And I think that’s true as it was about 30 people for real human stuff in the hotel first and now is already less than half, that is, 10 people at most.
The language robots speak was just Japanese and English first but now they can also speak Chinese and Korean, too.
For other thing, meeting customer’s request, they equipped with refrigerator at every room inside.
It looks like the occupancy rate is almost 100% even now and opening of Henn na Hotel 2 proves it.
I’ve never been there as it is very far from my place but I might go see it after Henn na Hotel 2 opened.
I thought all of these kind of things happen in the far future after I left the world.
But it was not, looks like things going faster than ever.
I think this hotel will be staffed only by robots or with a couple of human stuffs in the near future.
This is not only for the things about hotel but many others.
I really think we were born in really interesting era!