But this Tokyo’s Metropolitan Area Outer Underground Discharge Channel is becoming very popular nowadays (hereinafter, referred to as “Discharge Channel”).
Both Japanese and people from overseas visit this place every year.

Yes, I myself visited here this summer two times already. (;^_^A

One of the reasons is, its great scenery.
You can take “Instagenic” picture!!

But the feature of it is not only that, it also plays a very important role.
I’ll introduce you all about this Discharge Channel.

And it is tour so I’ll show you what to bring and how to book as well.

It is located in Kaskabe City in Saitama Prefecture.
If you know “Kureyon Shin-Chan”, its set is here Kasukabe City.

From Tokyo, you need to get to Omiya station in Saitama Prefecture first.
It is about 30 minutes from Ikebukuro or Shinjuku station in Tokyo.

Once you get to Omiya Station change the trains to Tobu Urban Park Line (Tobu Noda Line) there.
And get off the train at Mimami Sakurai Station.
It’s about 20 to 30 minutes from Omiya Station.

Please do not miss the bus, as there are only 2 buses an hour usually.
Here is the time table of the bus (Japanese).

If you like walking, yes, it is also possible still it takes about 45 minutes (3 km) from the station to Ryukyukan.

Long sleeve
As it is underground, it gets a bit cooler so you might need long sleeve even in summer (but T-shirt was fine with me in Summer so it depends on the person)

How To Join the Tour

Unfortunately, it is all Japanese.
But only a certain period, there is a special tour for people from overseas.
It is held until 26th December for this year 2019.
And I think every year it is held at a certain period, which is from August to December.

If you wanna join the tour and know the details, check this page.
You can make a reservation in the page.

What is Tokyo’s Metropolitan Area Outer Underground Discharge Channel for?

But why we needed such a big facility?

That’s because this area in around Soka City in Saitama Prefecture suffered flood from nearby rivers many times in the old days.
Actually not so old days.

There was heavy flood especially in 1986, 1987 and 1991.
No road could be scene by the muddy water and people live in there used boat to move.
Of curse cars and houses flooded, too.

This area has been surrounded big 3 rivers of Edo, Ara and Tone River.
And bowl-like terrain itself accumulates water.

To prevent further calamity by flood, this discharge channel was built in 2006.
The channel, which is built 50 meters below underground, became 6.3 km long in overall.
It cost 230 billion yen (about $2 billion).

But thanks to the channel, the area was saved from the flood.
If calculated the cost, it is said that it would have been 1.4 trillion yen ($12.5) if the area had been suffered flood.

Actually more than 100 times, the channel operated.
When the nearby rivers around the area flooded, the channel took in the water and discharged to Edo River.

Surprisingly, it can discharge no less than 50 ㎥ of water per second.
The amount of water can be that of swimming pool of 25 m.

Report of the Tour

Here is the Minami Sakurai Station. 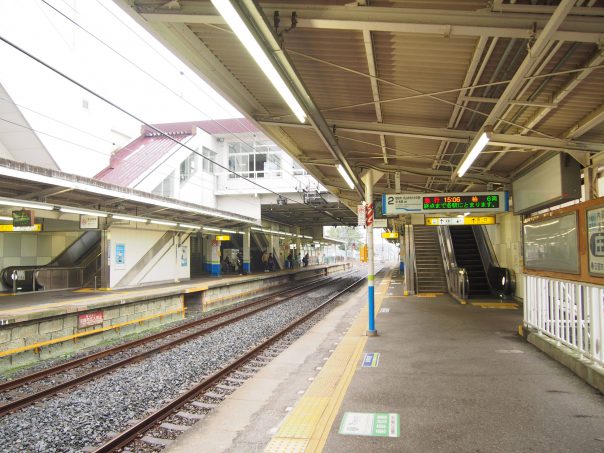 Yes, you need to get this station from Omiya station first.

This is the north exit in which you can get the bus. Got to the channel!! Technically speaking, here is Drainage Pump Station.
This is the heart for controlling a gigantic system.
And it’s the start point of the tour.

On the first floor, you can see the panel of the system of the discharge channel.
And you can enjoy AR by installing the app there. I could see the water filling up the room through mobile.
It was as if I were in the water. Reception is on the second floor so I went up.

There was a operation room with many panels on the floor.
That’s cool!! This place is used for checking amount of water of discharge channel.

I paid money and got the participation card. Now the tour started.
First the staff tells us the mechanism and story of this Discharge Channel.
Actually it is all Japanese but as I showed in “How To Join the Tour”, at a certain period, there is a special tour for people from overseas. Then we moved to the steps to No.1 Bank.
That is, Pressure-adjusting Water Tank.
It’s right next, just about 100-meter walk from the building. You need to step down (116 steps).
It is 22 meters below ground.
Taking a picture is prohibited while stepping down as it is dangerous to be distracted . I understand the reason this place is used as a set of drama or movie.

To ease the current of water from the tunnel underground and drain the water into Edo River smoothly, this Water Tank was built.

Here was a bit cooler.
Even in the middle of the summer the temperature is about 19 degrees (Celsius).

Once the water from the river coming in, sand and dirt also come in here.
But the ground looks clean. Actually, only this area, in which people walk around, staffs clean manually.

But once a year, they clean the floor using heavy machine such as digger or bulldozer.

I see, but from where can they carry such a big machine to the underground?

Can you see the rectangularly dented part on the ceiling?
Yes, that’s the place the machine taken in. This is the exact No1. Bank.
You can not go inside.
I see, water comes in from the tunnel. Free time to walk around was finished so we went back to the ground.

Next I could also check No1. Bank from the top.
It was just a quick look but this is also rare chance. And the tour finished.
It was about 30-minutes long. It was a great experience even to me, too.

I know many of you are looking for rare spot other than ordinary tourist spot.

Here is certainly the rare spot and will be rare experience.

Don’t forget to make a reservation in advance.
And check the time table of the bus as well.

It’s about in an hour from Tokyo!!

Ryukyukan (On the premise of Show Drainage Pump Station)