HOME > Food > How is Japanese Wasabi Made?

How is Japanese Wasabi Made? 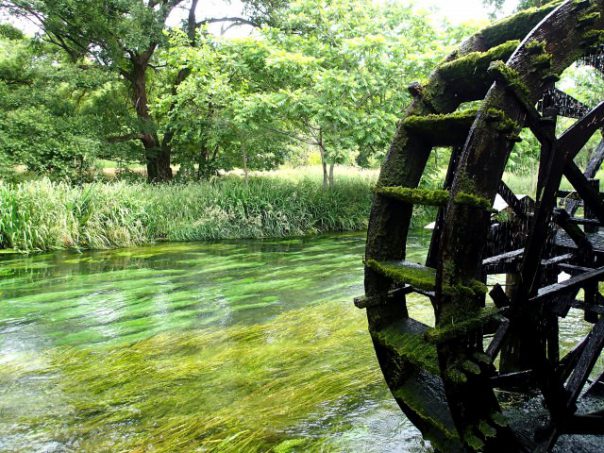 I don’t mean the movie Wasabi but Wasbi of food.
Yes, that green hot thing used in Sushi.

When I was a child I could not understand at all why adults enjoy wasabi, especially for Sushi.
I always insisted on removing Wasabi of Sushi or anything in those days.
Although now I’m sure to eat Sushi with wasabi if I have a chance to go to Sushi shop.

There are two types of Wasabi by the way, that is, Hon Wasabi or Wasabia japonica in a botanical name and horseradish or Armoracia rusticana.

To tell you the truth, it is said that most of all Wasabi used in Sushi shop or restaurant in other than Japan are not real Hon Wasabi or Wasabia japonica but horseradish of Armoracia rusticana.
Looks like many restaurants use food coloring and mustard for horseradish.

I talk about Hon Wasabi or Wasabi in Japan here. 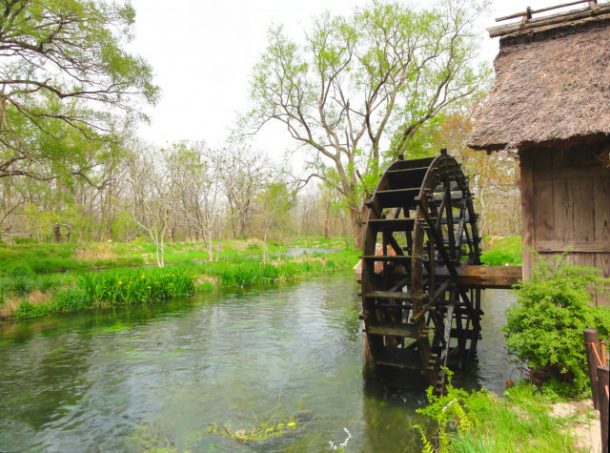 The origin of Wasabi is very old and there is a description touched on Wasabi in a medicinal herb dictionary called Honzowamyo in 918.

But it looks like it was not an edible food in those days and it is not until Kamakura era (1185-1333) that Wasabi which was grown naturally in temple was eaten.
Still it was not popular food in those days.
Cultivation of Wasabi started in Shizuoka Prefecture in around 1600 or in Edo era (1603-1867) and it spread among locals, too.

Edo era is the time Sushi and Soba appeared and they ate them with Wasabi.
They used Wasabi as condiments.

What is Wasabi made from?

I think most of us see Wasabi in a condition of green paste.
It has already been processed as edible condiments.
Before processing, Wasabi is like this. 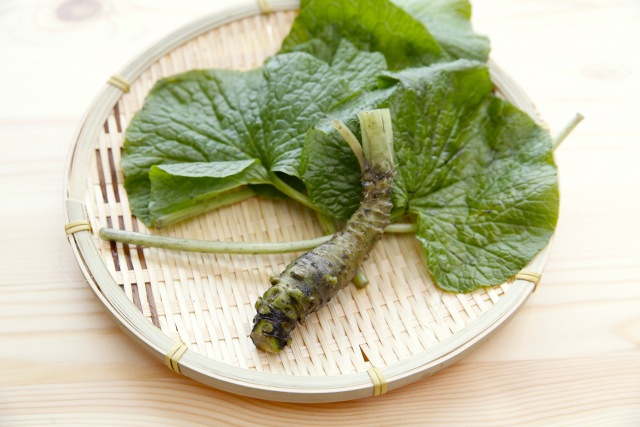 I think some of you already know it but how it is processed?
After picking Wasabi, you need to grate as you know.
What you need is a grater but professionals say grater of shark skin is the best. 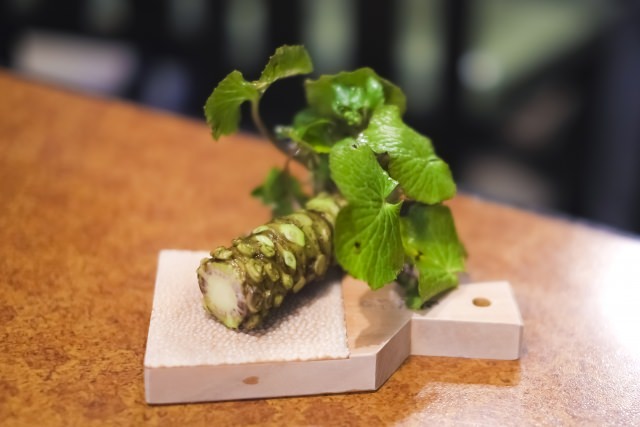 Because shark skin has a fine grain skin, that is, it can break more cells compared to ordinary silver grater.
The more break of cells the more strong pungency and scent it can have.
That’s why most professional use grater of shark skin traditionally since old days.

There is also a way to grind it.
You need to grind it like drawing Hiragana of Japanese letter “の”.
It is like drawing circle clockwise and make it bigger and bigger while grinding.
That helps making fine particles and makes it more pungency.
This strong pungency and scent only last for 10 minutes.

There is a saying “Don’t laugh during grinding Wasabi”
Using real Wasabi means competition with time.
But there is also a saying “Grind it with a laugh”.
It’s opposite, isn’t it.

That means you also need to relax when you grind Wasabi as too much force or nervousness can not make fine particle, that is, fresh pungency and scent.

If you go to Sushi shop in which Sushi master makes hand-rolled sushi on the spot, they surely grind real Wasabi from the first, not ready-made of Tube one and you can enjoy strong pungency and scent which make you cry sometimes, haha.

Where is Wasabi grown?

By the way, where they grow?
In the field like a cabbage?
Or swamp like a lotus root?

There are 2 types of cultivation.
One is in water and the other is in the field like a cabbage but not exact like.

I think most Japanese imagine Wasabi grown in a mountain stream if we think of Wasabi cultivation.
I also imagine it if I say Wasabi.
Let’s look at the differences! 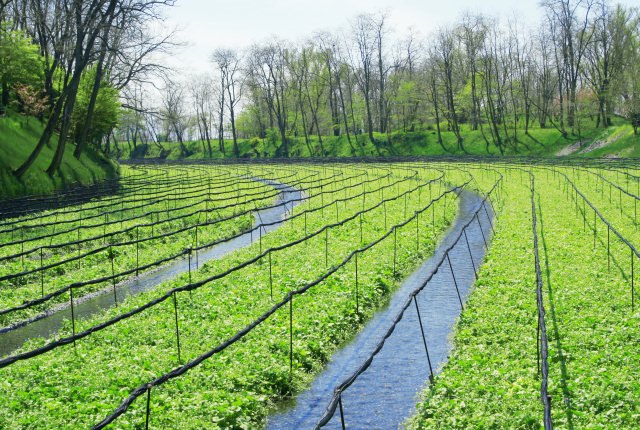 That is, this Wasabi grows in water of mountain stream or using spring water underground.
It needs clean water for its growth.
Growing condition is above sea level of 400 m to 600 m.
Water temperature needs to be about 10 degrees on average.

Its root is used for Sashimi or Sushi.
So you can also call it Hon Wasabi or Wasabia japonica. 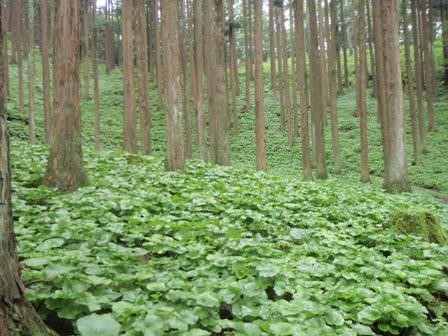 That is, this Wasabi grows in the field.

I did not know that there is Wasabi which grows in the field.
Not like Sawa Wasabi, its leaves and stems are used.

Looks like most of tubed or powdered Wasabi are this Hatake Wasabi.

Where to buy real Wasabi? 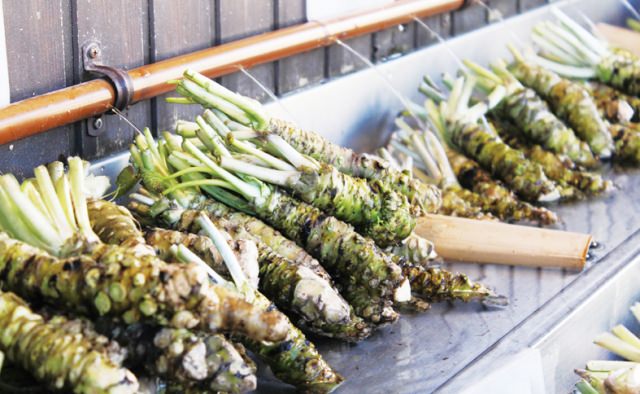 In Japan, if you go to a supermarket or a fish market you can buy both tubed type and real Hon wasabi.
But I thought it is impossible to buy real Hon Wasabi in overseas.
Freshness is very important for Wasabi that it can not be exported.

But surprisingly there were people who grow Hon Wasabi in overseas.
So if you contact them or go to Japanese restaurants that use their Wasabi you can enjoy Hon Wasabi.

Here are some of them.

Why is Wasabi served with Sushi? 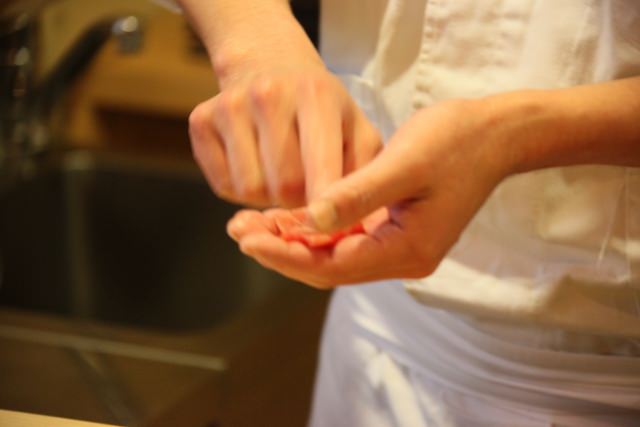 But why Sushi or Sashimi (slice of fish) always come with Wasabi?
Is there any specific reason?
Yes, there is.

Here are the reasons.

In those days, food preservation technique had not been developed.
Of course there was no electric refrigerator like now.
So there were chances of getting food poisoning.
But pungent principle of Wasabi or Allyl isothiocyanate had a bactericidal effect.

So people in the old days used Wasabi as a way of avoid getting food poisoning.

Actually Sushi in nowadays has no bad fishy smell although it has smell of fish as it is a fish.
But it might have a fishy smell in Edo period.

Pungent principle of Wasabi helps removing the smell of Sushi.
Then ginger, Japanese mustard or other condiments can also remove the smell as well so why it had to be Wasabi?

To Help Detoxication of Carcinogen

Our liver has detoxification enzyme that detoxifies carcinogen.
And Wasabi is said to have been most powerful vegetables that activates the enzyme.

This might be not related to Sushi and I’m not sure if people in the old days know even this fact but looks like Wasabi is good for your body.

It is always interesting as we grow older we also come to like the food once disliked.
Wasabi might have something in common with chili or hot pepper.

Too much Wasabi makes you just cry but right amount of it brings out the taste of the food.
Sometimes the kicks lent a glow to your life but limited only to proper amount.