Tokyo Ghoul became a big hit and becomes live-action movie this summer, doesn’t it.
Before its release, cafe of Tokyo Ghoul opened in Tokyo with horrifying but awesome menu.

Actor Nobuyuki Suzuki who plays a role of Kotaro Amon in the movie also came visit this cafe.
What is it like? 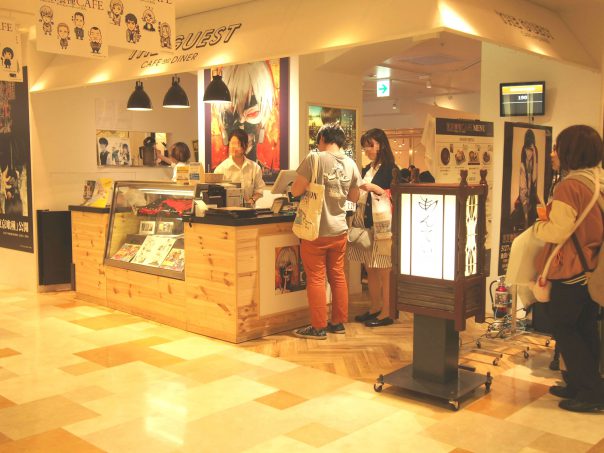 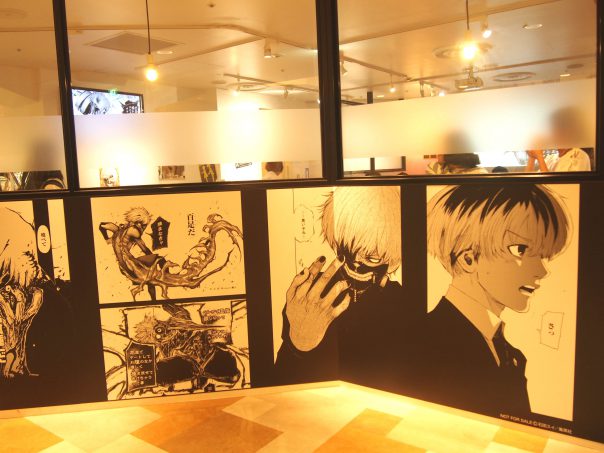 I myself had been once working at a cafe in this Parco when I was a student but the shops and atmosphere changed a lot over this 15 years.

Tokyo Ghoul Cafe was on 7th floor and I thought I might be able to enter the cafe as there was no line at entrance.

But when I turned back, there was a long line of people on the stairs that led to downstairs that I gave up in a flash.

I just took a picture of entrance and appearance of the cafe.
So I introduce menu with the pictures from official cite. 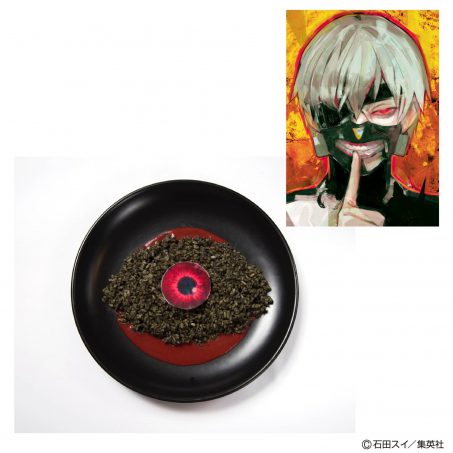 Kaneki’s eye got red after he became half Ghoul.

This curry recreated his red eye perfectly.
If you order this curry, you can try on mask of Kaneki and take picture.
For the taste, I read comment that says it is a bit hot curry but tasty.

Do you really eat this …? Burger Mr. Yoshimura gave Kaneki this one when he suffered hunger.
To survive as a Ghoul he need to eat it but he suffered a lot whether he eats it or not.
I’m really curious about inside this brown bag.

Is it a burger or? 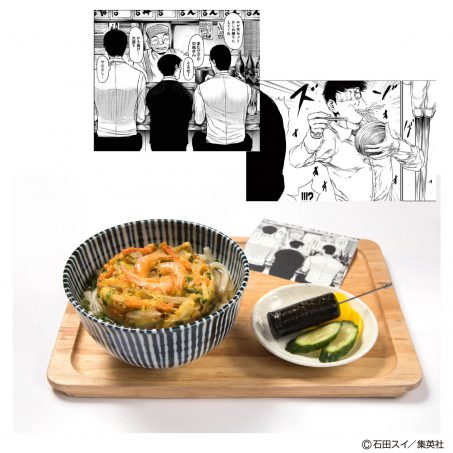 To me, the scene Amon eats this udon noodle was one of the best scenes.

Nakajima’s subordinate Kusaba who often eats outside with him was killed by Ghoul.
He said to Amon crying he has not anyone to eat outside and treat anymore.
Usually Amon is calm and quiet but only this time he stated to slurping udon noodles feverishly.
And then Amon said to Nakajima “Mr. Nakajima, please treat me from now on although I eat more than Kusaba’s”

Some people says this udon noodles is the best in the menu.
By the way, is it a transceiver? 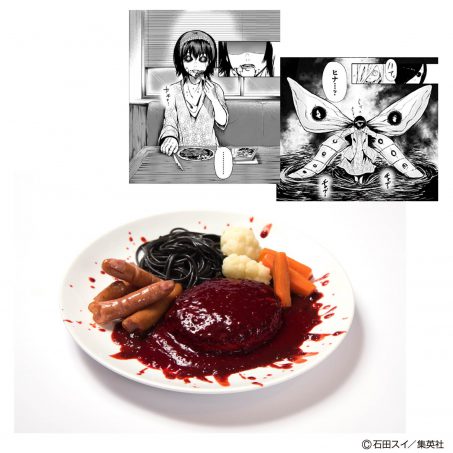 Kaneki stepped inside without knocking the door then he saw Hinami having a dish.
He got shocked to see the food on the menu because it was…
That’s the moment he realizes from the heart Hinami is also one of the Ghouls.

Sausages looks like fingers and sauce splattered on the dish makes the dish more scary look. 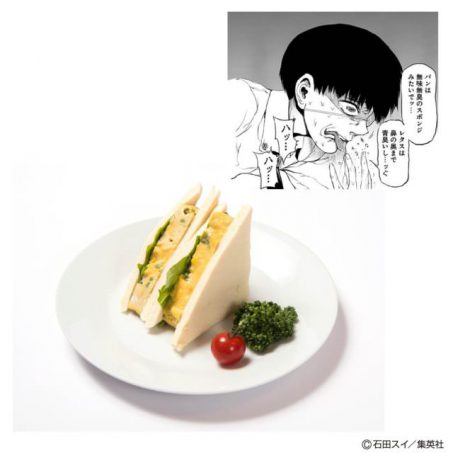 Kaneki reported impression when he ate sandwich after he got half Ghoul like that of professional one.

“Bread is like a tasteless and odorless sponge, lettuce smells like grass and the texture of
the cheese is like that of clay”
This is one of his great quotes to me.

I thought this is very funny if this was a ordinary cafe and had a menu named “Bad sandwich”.
I would rather order it by attracting the name and to check the taste.

It looks like they certainly focused on the remark Kaneki said for this sandwich, that means, try it and you’ll find how Ghouls feel when they eat sandwich. 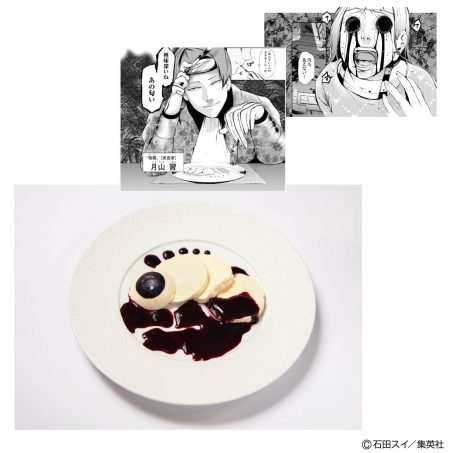 Tsukiyama really stands out by the character.
Sometimes he stands out more than main character Kaneki.

By the way, this eyeball moose was shocking when I saw it in anime.
Actually scene of Managa, although it was cut in anime, was more shocking as we see even the source of eyeball.

After reading the scene, well, it might require a bit of courage to have it.
But this eyeball is made with cheese mousse that it must be taste good with its sweetness and sourness. 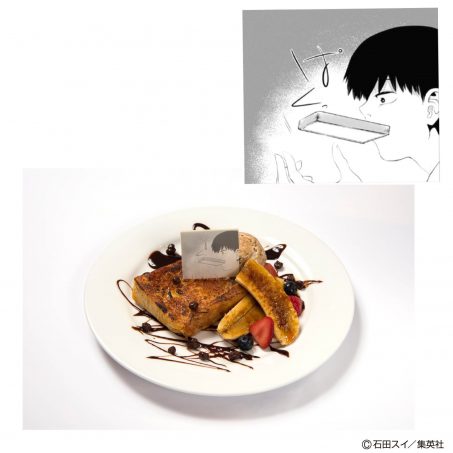 It looks good without thinking.

French toast with ice cream and coffee bean, it can not be bad.
This coffee bean toast is from the scene Kaneki tried to disguise the taste of bread by sprinkling coffee. 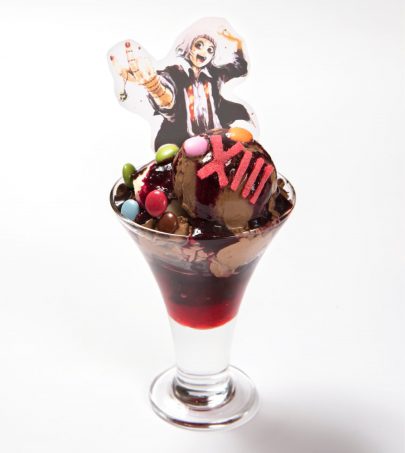 Jyuzo loves sweets and had a parfait at restaurant.
He is also very popular by his strong character and look.
His red hair pin or string is on the top of ice cream. 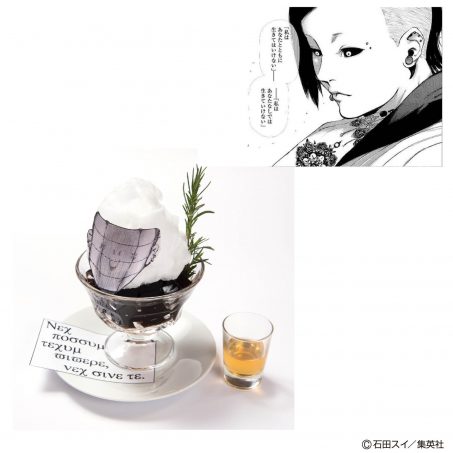 This coffee jelly is from the image of Uta.
He made all the masks for Ghouls.
Looks like you can find Uta’s snack when you add some syrup to the cotton candy on the jelly.

What do we find in the cotton candy?

Café latte of a cat 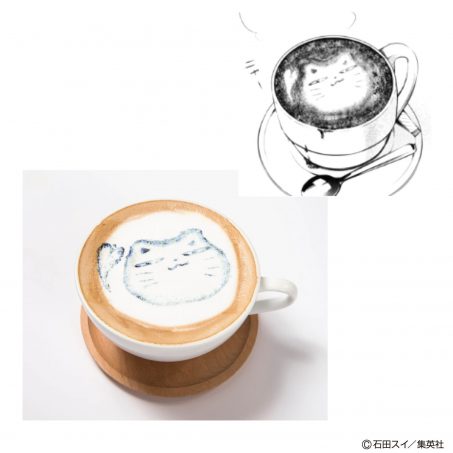 This Café latte is from the image of the cappuccino Kaneki served for Hide.

Looks like it is much bigger for the size than we imagine from the picture for the real one served at the cafe here.
But I thought we might be served a bit different cat picture depends on the skill of the stuff who makes it. 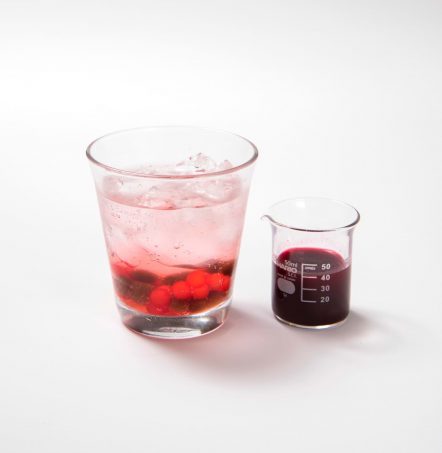 Ghoul has much more RC cell compared to human.
And that makes their powerful weapon Kagune.

Small balls on the bottom are tapioca.
Blood like drink in a beaker is syrup. 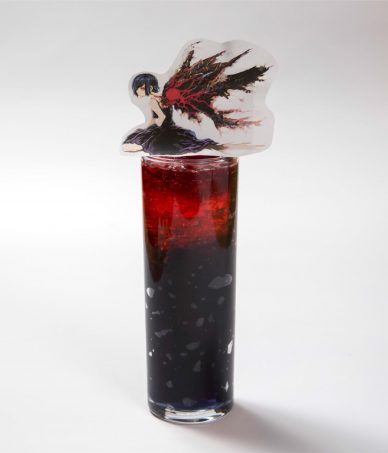 This jelly drink is from the image of Touka with her Kagune.
Beautiful color, isn’t it. 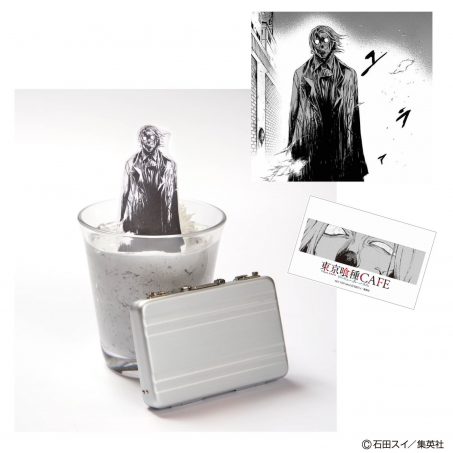 Mado Kureo is a human who battles with Ghoul but sometimes it looks like he is the villain although there is a reason.
You can get limited sticker when you open the small briefcase that comes with drink.

His picture on smoothie looks a bit scary. 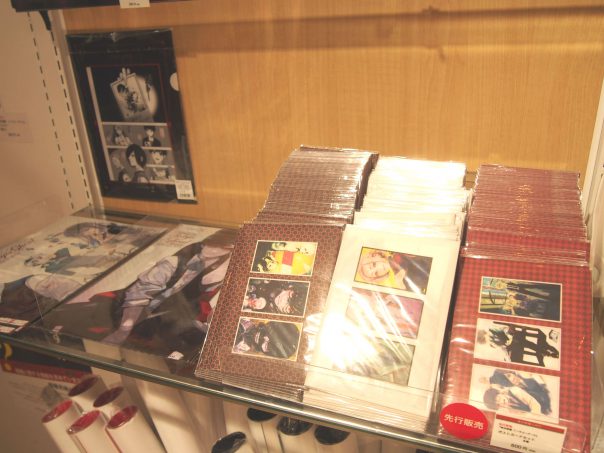 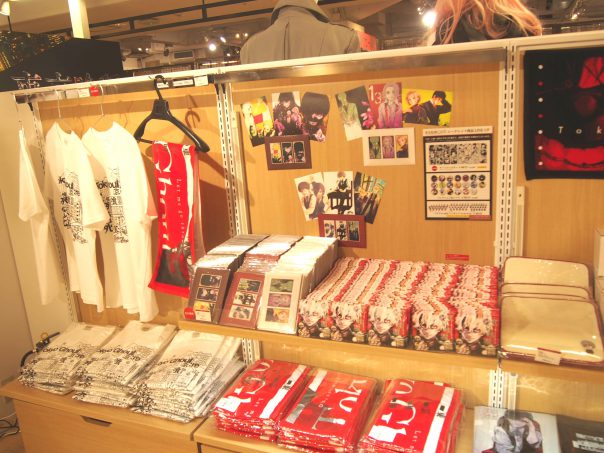 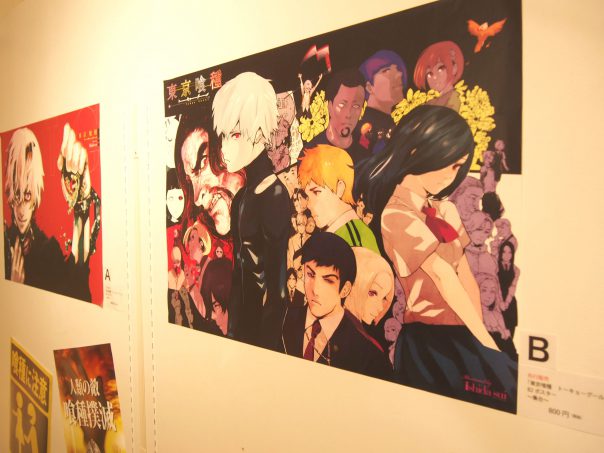 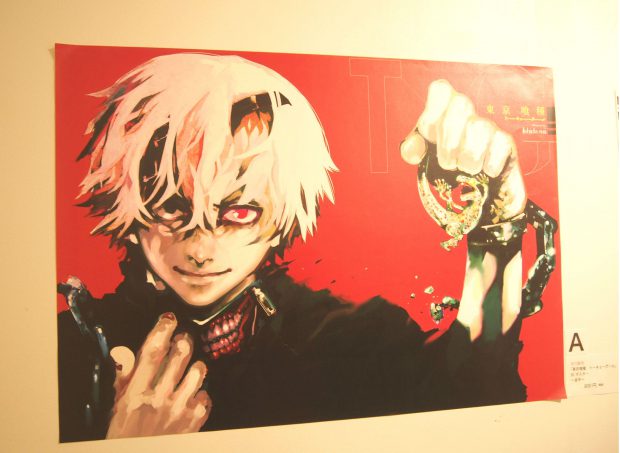 I did not enter the cafe but could find merchandise shop.
There were sticker, towel, T-shirt, poster, etc.
I like the sticker that says “Watch out for Ghoul”.

Some Scenes on the Wall 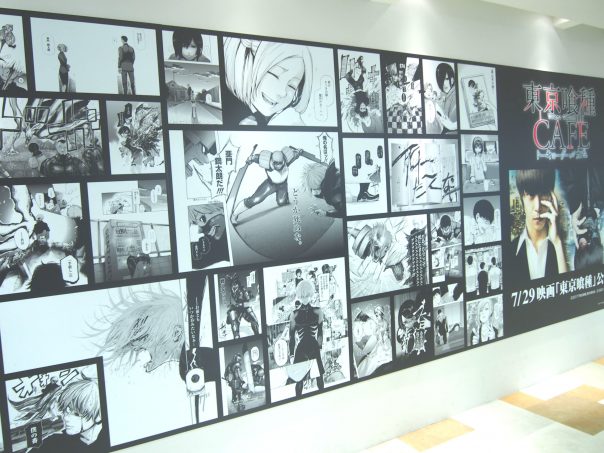 I could see some scenes of Manga on the wall. 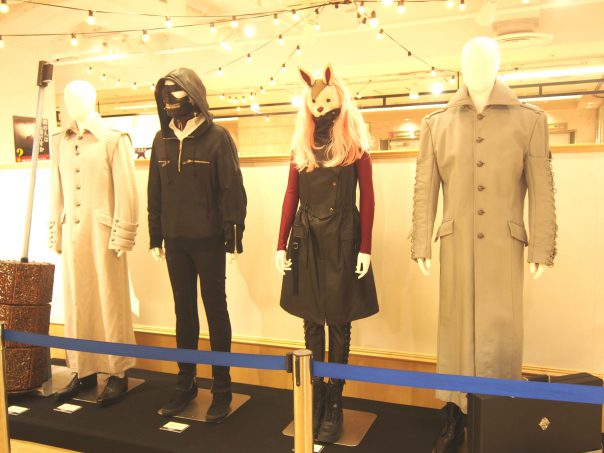 Most of the menu looks scary but the taste is good as long as I read the comment who went to the cafe.
But only for sandwich, I do not guarantee the taste as they also pursued literally bad taste.
Still if you are a big fan of Tokyo Ghoul, it’s worth trying!

It opens until 28th June and you can get a place mat of Tokyo Ghoul if you order an original menu.
I recommend you to visit on weekday except for busy time such as lunch or dinner as you have to join a long line of people if you visit holiday or lunch and dinner time.

« Meaning of My Treat
Join Nebuta Matsuri Festival in Tokyo »