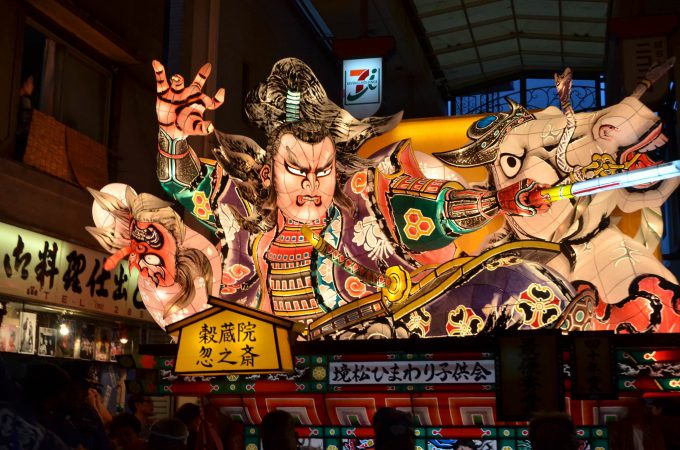 Nebuta Festival or Nebuta Matsuri that is held in summer is very famous festival and you might have already seen it on video or TV.
There are “Neputa Matsuri” in Hirosaki City and “Nebuta Matsuri” in Aomori City.
They are similar and both of them are held in Aomori Prefecture.

But this time I introduce Nebuta in Aomori City first.
And you can enjoy this Nebuta Matsuri even in Tokyo this June.

Why not join it if you are in Tokyo?

Nobody knows the very origin of Nebuta Matsuri but there are two famous stories about it.

One is that it derives from Tanabata Matsuri.
Tanabata Matsuri or Star Festival has its origin in China.
It was introduced to Japan in between 710 and 794.
This Tanabata Matsuri mixed with traditional customs and events such as Seirei Okuri or sending off the spirits of the dead in Tsugaru Peninsula in Aomori Prefecture that it became Nebuta we know today.

Another story is about battle war in between 794 and 1192.
There was a man called Tamuramaro no Sakanoue or great general who subdued the barbarians in North-Eastern Parts of Japan in those days.

It is said that he used lantern, flute and drum to attract enemies.
But this is just one of the stories that nobody knows if it really happened.

The word Nebuta looks like came from Nemutashi.
Nemutashi is an old expression of sleepy.
Autumn was the season for farming almost all over Japan when Tanabata festival was held according to the lunar calendar (Solar calendar has been used since 1874 in Japan).

Drowsiness was a scary enemy as they can not stop working once it comes down for harsh winter and they also use sharp farming tools such as sickle during farming, so they have to be careful.
To beat or remove drowsiness, people used paper dolls which take the drowsiness instead of them and floated them in river.

This is called Nemuri Nagashi.

Nemuri or Nemuru means sleep and Nagashi or Nagasu means float.
Nemuri Nagashi was a custom or ritual to drive away drowsiness.

This straw doll changed into lantern with the spread of paper, bamboo and candle.
And it became Ogi Nebuta or fan-shaped Nebuta we know today.

But what does it mean?

Its origin is “Dase”, that is, “Hand over” in English.

At the time lantern was used in Nemuri Nagashi, children were visiting each houses saying “Hand over or Scratch”.
They were collecting candles for lantern.
And the word “Dase” changed into “Rase” with the course of time.

It looks like “Trick or Treat” of Halloween in United States, isn’t it.
Every nation might have this kind of similar event for child. 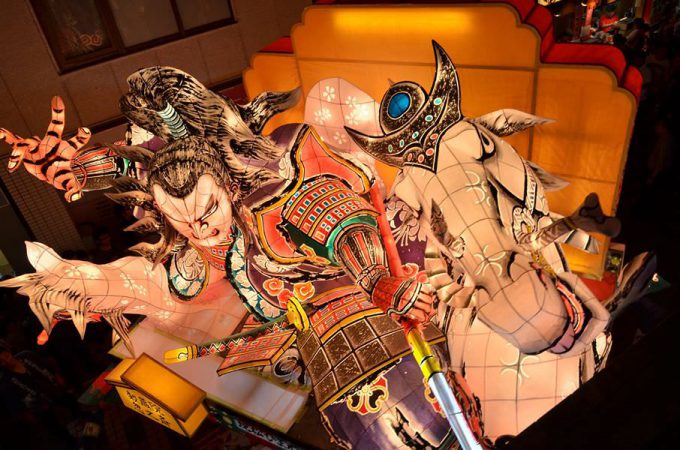 You can enjoy Nebuta Matsuri even in Tokyo!

On 24 June 2017, it celebrates 70th Anniversary of Nakanobu shopping district’s foundation.
It is smaller scale Nebuta but you can see 2 of 4-meter-tall fancy Nebuta warrior dolls there.
Haneto are also dancing to the traditional music and rhythm of drums.

Anyone can join this dancing so it is a good opportunity to experience traditional Japanese festival first-hand.

Following is the details of the festival.

Special Project! Celebrating 70th Anniversary of Nakanobu shopping district
As a part of 2020 Olympics project preparation, we are celebrating the concept of (Borderless Tradition) by featuring foreigners in a Mini Nakanobu’s Nebuta Festival in June.
In the spirit of celebrating the 70th anniversary of Nakanobu shopping district’s foundation, we are holding a traditional Nebuta Festival in collaboration with non-Japanese.
For all non-Japanese who would like to participate and be a part of this famous festival, this is a good chance for you to first-hand experience well-known elements of a traditional Nebuta Festival; Haneto(Nebuta Dancing), and Hikite(Nebuta crawler)
This Mini festival is a test for the big real one next year (Takes place once every two years)
So how about you come along and enjoy the festivities?
We don’t care which Gender, Age or Nationality you belong to…we just want you to have fun celebrating with us!
We can’t wait to celebrate Nakanobu’s Nebuta Festival with you in June and we think it will be a good chance to experience some Japanese traditional aspects.
So please feel free to join us! We are waiting for you!
＜Meeting Place＞
Nakanobu Meeting Hall
＜Access details ＞
Subway:
★Tōkyū Ikegami Line「Ebara-Nakanobu Station」
★Tōkyū Ōimachi Line「Nakanobu Station」
★Toei Asakusa Line 「Nakanobu Station」 then Walking 2 minute
http://www.nakanobu.com/info/2014100300951/0004094.html
＜Time&Date＞
24th of June, 2017
Reception (@Nakanobu Meeting Hall): 14:45~15:00
Parade opening (@Ebara-Nakanobu shopping district , Skip road):17:00~19:00
＜Schedule＞
14:45~15:00   Reception
15:00~16:00    Changing into parade clothes
16:30～      Orientation on the parade
（The flow of the show and explaining the Nebuta Dance）
17:00~19:00    Parade opening
19: 15~      Changing clothes then breaking up
＜P.S＞
Since Nebuta Dance is very energetic; please make sure to wear comfortable clothes and sneakers during the parade.
＜Organizers’ note＞
☆ Participation is free of charge!
☆ Participants will be receiving some souvenirs!
☆ Participants will be receiving the bell used during the parade.
☆While performing the Nebuta Dance some bells will fall down, if they stay intact till the end of the parade they are considered of great luck….so you better be on the lookout for those and catch some good luck yourself!
＜Contact Us＞
t.suzuki@nakanobu.com 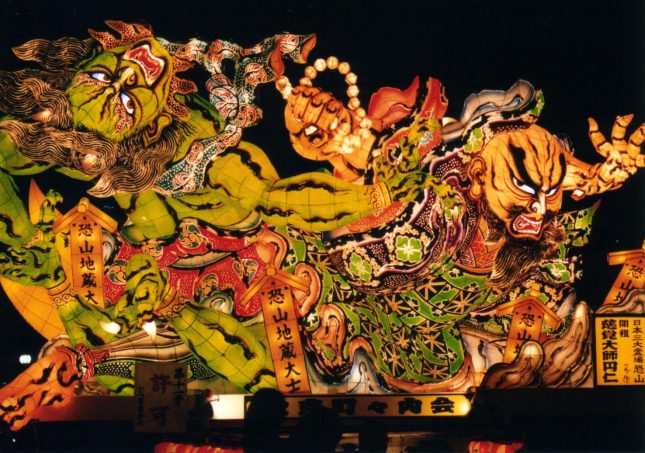 It might become good experience to join both Nebuta Matsuri in Tokyo and Aomori!

« Tokyo Ghoul Cafe Opens with Horrifying Menu
What is a Tanuki? »