All about Japanese Vending Machine 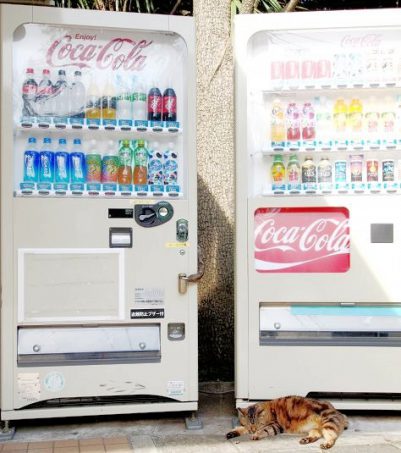 The reason of top diffusion rate of Japanese vending machine

United States is the top if you just count the number of vending machine in the world.
But if you calculate the diffusion rate by taking country’s population and land area into consideration Japan is the top in the world.

Why there are so many vending machines on the street?

Main reason is that security in Japan is well maintained.
No one try to break or steal it for money.

At least as long as I know I’ve not heard of the news such as vending machine was broken or stolen.

Actually it was a surprise to me when I heard first that vending machine outside is broken or stolen in abroad.

I wonder if they use iron bar to break it or use truck to carry it away.
If so it really stands out even at night in Japan and I feel like it is uncivilized way.

I don’t say there is no crime in Japan but that kind of crime that includes direct violent action (breaking something directly) is very low as most people feel it is too uncivilized, wild and it really stands out.
I think that kind of Japanese feeling becomes a mental barrier that’s why there are many vending machine outside and nobody break or steal it in Japan.

This is common thing in Japan but you can get exact what you want and get correct changes.

As long as I live here in Japan I didn’t get wrong drink or wrong change while some countries’s don’t give you correct drink or change sometimes.

But note that you might get not very cold or hot drink if you are very unlucky.
It is because of malfunctioning of compressor in vending machine.
If compressor doesn’t work humidification system stops working that affects the temperature of drinks.

Malfunctioning of vending machine is also very rare but still there might be the chances of getting lukewarm drink.

When I was a child, I mean in early 1980s vending machine was just for hot drink, cold drink and cigarette,etc.
But it makes me surprise at the variety of contents it holds now.

If you go to Akihabara or anime-related place, you can see even anime-decorated vending machine.
That must be fun for anime lovers!

How Many Vending Machine in Japan?

Now there are over 4.5 million vending machines all over Japan.
This 4.5 million includes drinks, foods, snacks, etc.

That’s so many considering the area of island Japan.

Actually the number was already about 2.4 million in 1991.
So there is not a big difference compared to that of about 30 years ago.
Rather the peak was 2.67 million in 2005 and the number has been decreasing little by little.

I think that’s because the number of the vending machined is already too much in Japan.

And thanks to technology, they came to sell more efficiently.
That is, they could sell more drinks from one vending machine instead of increasing the number.
With making use of IT, they can get more correct date than before and reflect it in buying behavior of the consumers.

Trend of next generation vending machine

Since around 2010 I could see touch screen digital vending machines especially inside station.
Instead of real canned drinks there are digital images of each drinks and you just touch the image you want.

I rarely buy drinks from vending machine but a couple of times I used this vending machine and found that it is very easy to buy compared to ordinary vending machine.
No need to push small button strongly to buy but you just touch the image and you can get it.

Surprising point of this vending machine is not only that.
It has AR camera and sensor built-in that identify the person’s gender and generation, weather and temperature.

It enables vending machine to suggest and display recommended drink for each person who approaches it.
If its stock is zero it doesn’t display the drink and display another suitable drink instead.
And it displays, for example, fresh drink in Summer as advertisement like commercial in video clip if there is no one in front of it and once a person approaches it it changes the display to ordinary selection of drinks.

Ordinary vending machine allowed only cash but you can use mobile wallet phone and rechargeable prepaid IC card that can be used as a train pass such as suica for this vending machine.

It is also paying attention to energy saving than before.

Wave of digitization even to vending machine!

Actually that is easy to buy and it is good for recommendation of what I want on the spot or no display of no stock drink.
Eco-friendly way is also good.

But I sometimes think

“Do we need this many vending machines?”

Is there that much demand?

But if you take the number from another point of view, it also helps improving security.
At night it illuminates the path and street with bright right.
If there is no vending machine on small path or street at night I understand it spurs increase of the crime.
Especially for women it will be a kind of emotional support just as it is there at night.

Anyway I thought we can buy almost anything for small things that we need in our daily lives from vending machine with easier than ever now.

I might try this touch screen vending machine again for checking the difference when I first used it 5 years ago.