Went to LAWSON of Dragon Quest in Akihabara! Checked the goods and shot video!!

I decided to stop playing video game when I was in high school but, I, now over 30, got into it.

Dragon Quest became a big topic after releasing its 3D movie in August, so this time I went to LAWSON collaborated with Dragon Quest in Akihabara this time.

I introduce the atmosphere and goods inside.

It takes 5 to 10 minutes from Akihabara station to LAWSON collaborated with Dragon Quest.

After exiting Akihabara station through Denkigai Exit , go straight to an intersection.

Cross the intersection and turn right at the first street on the right side.
Keep walking for about 50 meterss, then there’ll be LAWSON collaborated with Dragon Quest on the left.

I feel like I go go Akihabara almost every week recently.

And this special LASWON collaborated with Dragon Quest opened 4 years ago, in 2015!

I myself go inside sometimes when I come to Akihabara.

This time I checked the atmosphere and the Dragon Quest goods, so I introduce them here.

Atmosphere inside of LAWSON and Dragon Quest Goods 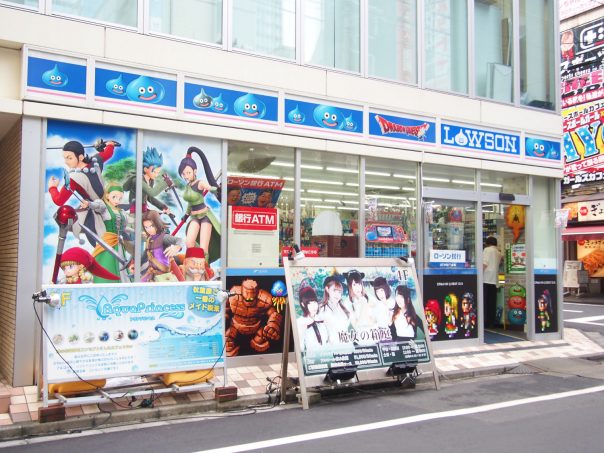 You can listen to the sound effect used in the video game such as entering the symbol mark of stairs when you enter the shop. Right after entering the LAWSON, you can see T-shirt of Dragon Quest.

Dot designed T-shirt of Toki no Keshin and Slime.
It is an official shop limited T-shirt.

Back of it are canned candies of Slime.
They are Kawaii. 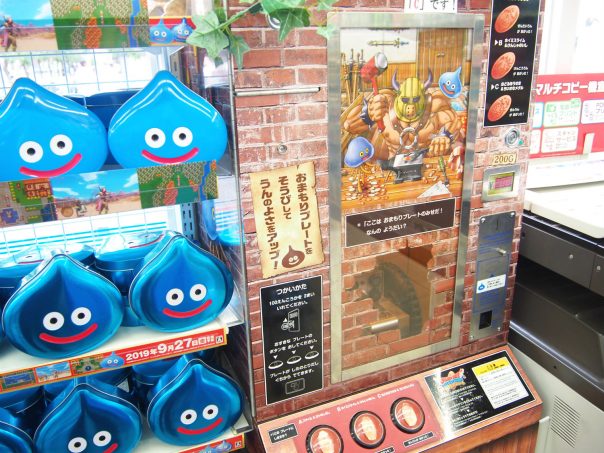 You can make an amulet plate right next to it.

Choose a plate from 3 designs and it makes an amulet plate. 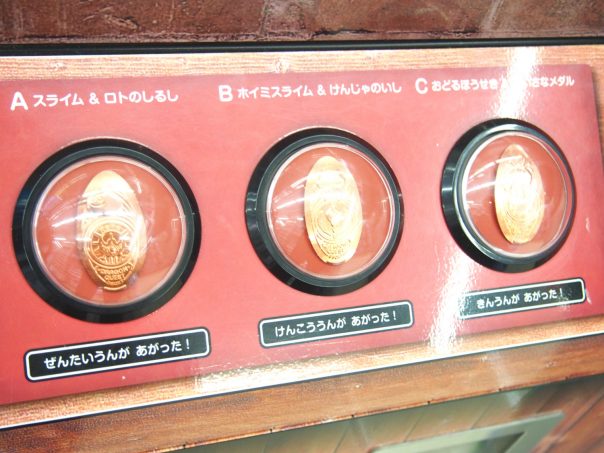 DRAGON QUEST BANK
Japanese written on the machine says it protects your money from monsters.

In front of it is, as long as I remember, symbol mark of Rūra (Zoom)!!

If you stand on it, you can listen to the sound effect of Rūra, I think (I did not stand on it but I could hear the sound of Rūra while shooting in other place inside) 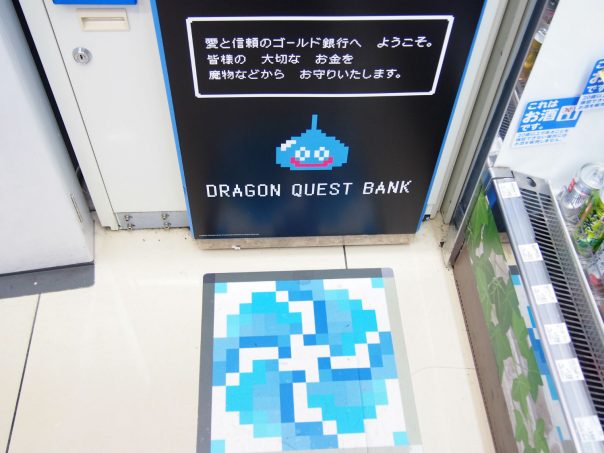 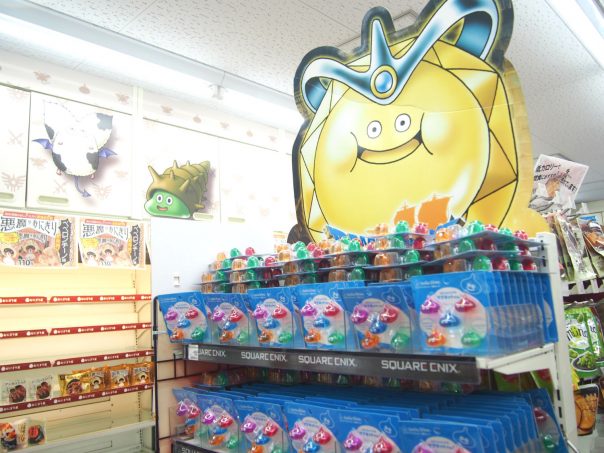 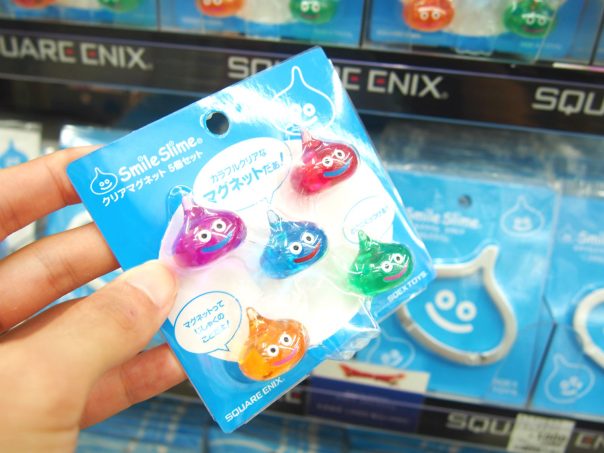 I don’t know this big slime, which looks like combination of Rockbomb and King Slime as my last play was Dragon Quest 5.

Under it I found was magnets of Slime！
5 types!

I know I do not have any ways to use it even if I bought it, but I was torn whether or not to buy until the end.
Maybe next time when I come, I might buy it. This cap of Slime is good!
You’ll definitely stand out if you wear it even here in Akihabara. Even umbrella of Slime!!
I was interested in the design but couldn’t find the picture around.

But it was sold in Amazon here.
This is also Kawaii design of Slime! 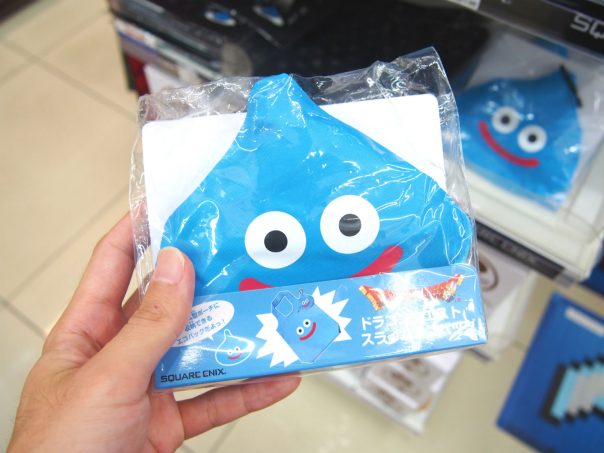 There is also an Eco-Bag of Slime!
Why don’t you use it instead of plastic bag?。

Plastic Board of Dragon Quest XI 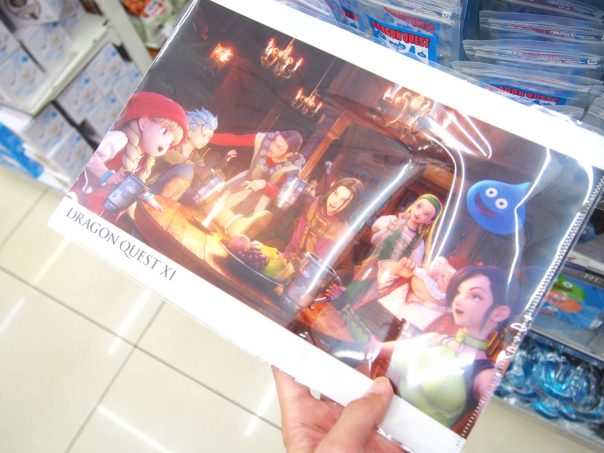 Plastic board also!
This is from Dragon Quest XI, isn’t it! 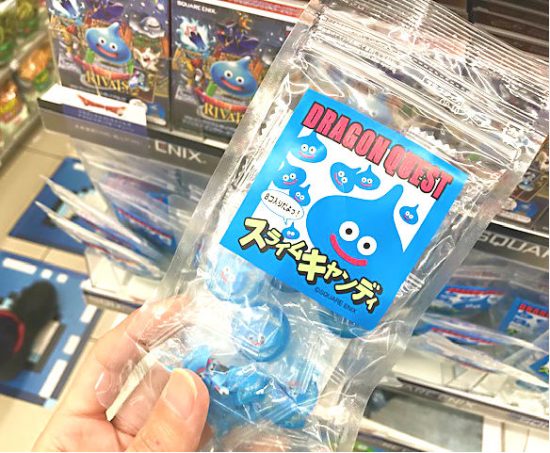 This is cute,Candy of Slime! Inside of the shop is lively with various monsters! 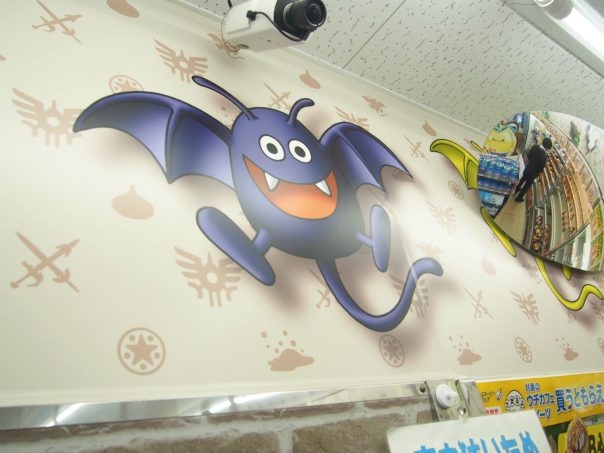 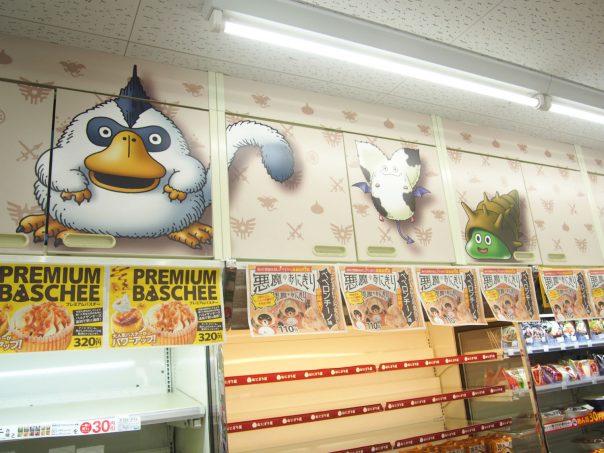 Once you get the goods of Dragon Quest, arrow marks on the floor lead you to the cashier.

There is a risk of getting poison on the way and can’t reach to the cashier if you drop your guard, so let’s make sure your steps and walk with care! 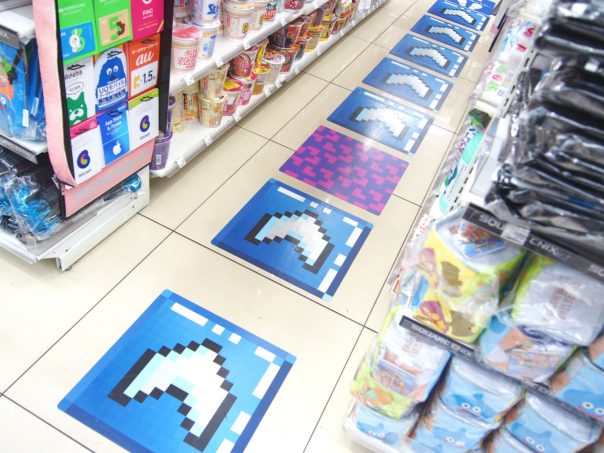 Warabimochi is a traditional Japanese dessert made from bracken starch, soybean flour.
It is usually covered with roasted soybean flour called Kinako.

Not only here at this special LAWSON of Dragon Quest in Akihabara but also at usual LAWSON all over Japan, you can buy this Slime Warabimochi.

3 types of Warabimochi, Slime, She-Slime and Metal Slime are sold.

The price is 200 yen (including tax) for each flavors.

So, I bought it right away
Purchased simple taste of ramune flavor! Just the package is design of Slime, but it looks Kawaii, anyway.

Actually to take a picture of items inside of a convenience store, much more uploading on YouTube, is usually NG (no good).

So, I thought my suggestion would be declined, but was actually OK to take a picture for my blog in the end!! Σ(ﾟДﾟ)

Got carried away, asked “Is it OK to take a video for YouTube?”, then the staff thought for a while like “Well”, but gave me go sign in the end.

It was also luck of me that the full time staff of LAWSON happened to come at the back door!

That’s just like LAWSON, which collaborated with Dragon Quest, having a generous mind and playfulness!

Drop by at LAWSON of Dragon Quest if you have a chance to come to Akihabara!

And this vending machine in Akihabara is also a kind of little-known-must spot.

Vending Machine in Akihabara was too strange and scary!! Bought some mystery items!!

Other Related Post of Akihabara and Dragon Quest
Vending Machine in Akihabara was too strange and scary!! Bought some mystery items!!
Review of Movie of Dragon Quest: Your Story which became a controversial movie!!

« Beautiful 10 Japanese Anime commercials in YouTube!! They touch our hearts!
Tokyo Ghoul (and :re) best quotes and moments with Japanese!! »