HOME > Culture > What is a Tanuki?

What is a Tanuki? 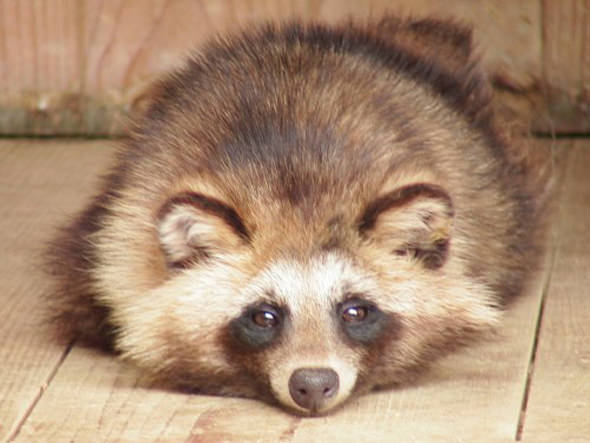 Tanuki means raccoon dog in English.
It lives all over Japan from Hokkaido to Okinawa Prefecture.
I myself have seen wild Tanuki long time ago.
As you can see in the picture they are very cute!
It is a common animal since old days in Japan.
It appears in anime as well as in Japanese folklore.
But what is it like in real life?
Here I look at Tanuki from a variety of angles.

It belongs to a dog family.
Although it does not have a good eyesight, it has a keen nose.
It is about 50 cm-70 cm and the weight is 4-6 kg.
The color of it is grey-brown or dark brown.
In the old days it is said to be nocturnal animal but they sometimes seen in the day time or evening, too recently.
It is omnivorous animal that eats small animals, fruit, nuts, etc. and can climbs tree for food.
If it lives near sea, it eats crab and sea urchin, too.
It hibernates that before winter it gets a lot of foods and increasing the weight by 50%.
Average lifespan of it is usually 6-8 years
Interesting point of it is it sometimes passes out when it got a shock.
Or it is also said to be a habit to cheat predator when it is driven into a corner.
There is a word Tanuki Neiri in Japanese and that means to pretend to be sleeping.
When something inconvenient happened and heard, the person pretend to sleep to show he or she is sleeping that nothing can be heard.
Tanuki Neiri comes from this characteristics of Tanuki.

Tanuki also makes territorial dung at a certain place.
It is called Tamefun in Japanese.
It is said that 1 Tanuki makes about 10 Tamefun and by this territorial dung, Tanuki informs other Tanuki of its existence and judges how many of them are around in the area.
So this is not the kind of usual territorial dung of animal that shows to keep out but it is to inform or share information among them. 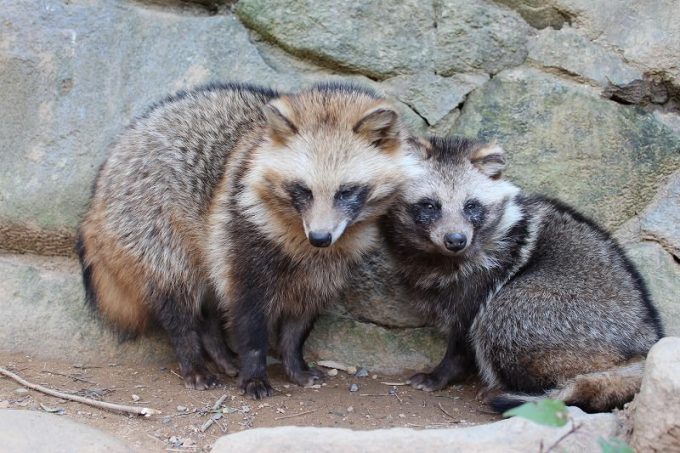 Every January to March, they make a pair and act together after that.
They are not aggressive animals that even if other Tanuki enters into its territory, they just avoid each others and no battle caused for female Tanuki.
During the the gestation period for 2 months, male accompanies female all the time and keep taking foods to female after birth of a child.
There is also a case male takes care of the child during female hunts food.
And if one of the pair died, it never make a couple.
I can not help respecting and holding attachment to Tanuki.

Tanuki usually lives in forest.
But their great adaptability made them live from seashore, mountain area over 3000 meters above sea level to subtropical zone other than Japan.
They actually live also in some parts of China, Korea and Russia.
They rarely come down to town in old days but now it looks like even in Tokyo you can see Tanuki.
Forestry development forced Tanuki to moves to city.
Same case as bear.
Although I have not seen Tanuki in Tokyo that I think it is very rare to see Tanuki in Tokyo.

Keep Tanuki as a Pet?

I think it is difficult to keep Tanuki as a pet as they are originally timid animal.
But there are some cases it became a pet and lived with human.
Looks like if you keep it when it was baby or little, it shows affection to people.
But still there are some cases they attack or threaten people when you keep it as a pet.
And you have to check your country’s law as it sometimes bans to keep Tanuki.
But most importantly, you have to be the one who are responsible for it until it dies.
Some people keep animals just because they are cute but throw away easily in the end when they understand it is harder than they imagine to keep animal as a pet.
Very sad ending waits for that kind of animals.
Not only for Tanuki but for all the other animals we have to understand what we are going to handle is life itself and we have to be the ones who take care of its whole life.

I once read and watched Tanuki is caught because of its fur.
Actually they are killed in very cruel way although I do not write down the details here.
People might buy clothes with fur just thinking this is beautiful or cool but I wonder how many of us know the fact behind it.
I wonder if we really need fur of animals for our clothes even if it leads to their painful death we can not even imagine.
According to an analysis of the Humane Society of the United States, even the garments sell as a faux fur includes fur of Tanuki. 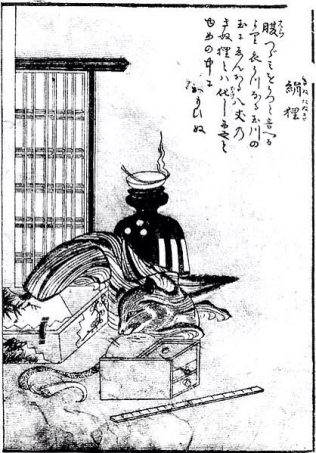 I sometimes read folklore of Tanuki and they had divine powers like fox’s case.
In the story, they often change themselves into human using a leaf and cheat people.
When they buy something they use leaf for money but people do not understand it is leaf as they use divine powers for it.
And after Tanuki left the money changes into original shape of leaf and people realize they were cheated by Tanuki.
These are the famous stories of another face of Tanuki as a mythical creature.
By the way, Shikoku District is most famous for Tanuki in Japan.
Many legend or folklore made in Shikoku.
Inugamigyoubu is said to be most powerful Tanuki that led 808 Tanuki in Shikoku.
This Inugami Gyoubu looked like made based on the historical fact Matsuyama Sodo Happyakuya-danuki Monogatari of Matsuyama clan.
If you know Ghibli’s movie Pom Poko or Heisei Tanuki Gassen Pompoko, you’ll know Inugamigyoubu as it appears in it, too. 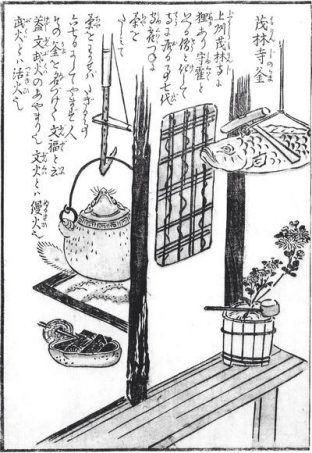 I introduce here another famous folklore Bunbuku Chagama.
Once upon a time, there was a poor man who runs secondhand goods shop.
He worked hard but was also a clumsy that he was still poor.
One day he finds a iron tea ceremony pot or Chagama when he walks in a rice field.
He thought he might be able to sell this.
He takes it back home and washes it as it is not clean.
And when he pours water and puts Chagama on the fire it shouts “It’s hot!!”
Chagama jumped onto the floor and arms, legs and face comes out from it.
It was Tanuki.
Tauki says “My name is Bunbuku, I’m afraid but I’m hungry that could give me something to eat?”
He felt sorry for Bunbuku that he makes wheat porridge.
After meal Bunbuku tells the man that it could not return to itself after competition of transforming with friends and asks him of taking.
He was also clumsy that he felt sympathy for Bunbuku but he could not afford to take Bunbuku in house.
Then Bunbuku says “I make money by walking the tightrope at a show-booth”
They make a show-booth and Bunbuku walks, jumps and bounces with umbrella to the rhythm of drum he hits.
Their show made a big hit and made a lot of money.
But Bunbuku suffers disease in the course of time and dies.
He takes Bunbuku to temple for its soul.
Even now Bunbuku or Chagama is held at Morin Temple in Gunma Prefecture.
The last part of Morin Temple is real that you can see Bunbuku or Chagama if you go visit there.
This story is a good and heart-warming story in which Tanuki pays a man back. 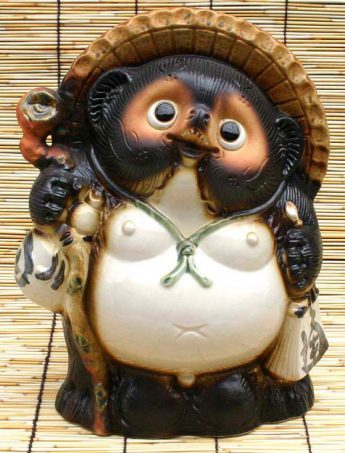 If you’ve already come visit Japan you might have seen Tanuki statue in front of Izakaya or Japanese style bar.
It usually wears a straw hat with its sake bottle in its hand.
It looks cute to me.
But why Tanuki?
It’s because Tanuki consists of two word, that is, Ta and Nuki.
Ta means others and Nuki or Nuku means to overtake.
So that means to overtake others.
Statue of Tanuki meant wish of to be No 1.

But who came up with this idea?
Tetsuzo Fujiwara is said to be the first person who made this statue of Tanuki.
He was born in 1877 and he made first Tanuki statue in 1936.
He was told to make statue of Tanuki in his dream that he started making it.
Tanuki Statue is Shigaraki ware.
Shigaraki ware is famous pottery in Shiga Prefecture and it has been made since Nara period.
Characteristics of it is a reddish brown color covered with deep green glaze.
Original one Tetsuzo Fujiwara made looks more like wild one and not such a cute Tanuki we can see today.
With the course of time, the shape changed into more chubby and the face more amiable.
In 1952, when Showa emperor visits Shigaraki or Shiga Prefecture, he and locals welcomed emperor by putting Tanuki Statue along a road.
Showa emperor has loved and collected Tanuki statue since he was a child that he liked those Tanuki statues along the road.
Media brought up the episode and Shigaraki Tanuki statue became popular nationwide.

Characteristics of Tanuki statue are straw hat, big eye, smile, account book, sake bottle, thick tail, big belly, big testicular.
Each of them has meaning.
Hat for avoiding unexpected bad luck or disaster.
Big eye for taking care of in all directions, that is, taking care of customers.
Smile for as you know it is very important for business, nobody wants to buy or communicates with the person who always making a grumpy face.
Account book for relationship as people in those days sometimes put Sake on their tabs, that is, relationship was very important between them at the time.
Sake bottle for the wish of no scarce of food and drink.
Thick tail for stability as it supports body to stand.
Big belly for generosity that to stay calm without being distracted by small things and judge things calmly.
Big testicular is also called gold bag.
It holds wish of increase of money one can use freely.
So all of them imply fortune or good luck.

My Memory of Tanuki

I sometimes went to mountain area in Saitama Prefecture in between 1995 and 2000.
And could see Tanuki several times but sadly what I could see was mostly already dead on the road.
Their character or habit of passing out or pretending dead when they encountered with car led them to real death.
But it is surprising there are some eyewitness reports even in Tokyo.
Tokyo is actually not small that if you go to the edge of Tokyo there are much nature and mountains that it is understandable.
But even in the center of Tokyo, they look like appear.
There was a case Tanuki entered building through automatic door at night in center of Tokyo.
I’ve not seen it in Tokyo that I want to encounter with them someday.