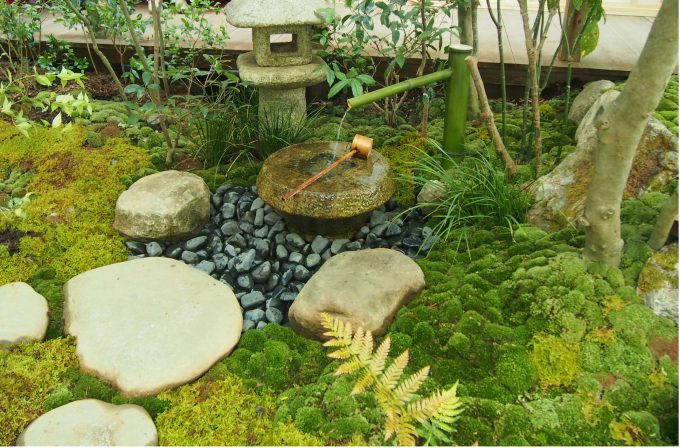 Wabi is a noun form of Wabishii or kanashii.
Wabishii means felling lonely and miserable.
Kanashii means feeling sad.
Wabishii and Knanashii are both adjective that are used even now but same meaning of wabu had been used in the old days
Wabu has several meanings from feeling discouraged, lonely and pain to enjoying the condition of solemnness.
It originally meant consciousness to feel or find contentment in shortage or poverty.

Wabi Tea or Wabi cha
Spirit of Wabi has a strong connection with Japanese tea ceremony.
Tea ceremony has been held since Nara period. (between 710 and 784)
But it was not like the image we have today, it was more like the occasion in which only upper-class people come together.
It included business purpose.
All the tea-things were inevitably gorgeous in those days.
There was no piece of essence of Wabi there.
Jyukou Murata is said to be the first one who used a simple or a rough tea bowl for the first time in Muromachi period. (between 1338 and 1573)
He was Zen priest and master of tea ceremony at the same time.
Jyouou Takeno (disciple of Murata Jyukou) took over his manner and a disciple of Jyouou Takeno is the famous character in tea ceremony Rikyu Senno.
He is said to have made the basic of Wabi Tea.
Wabi Tes is something that pursues mentality over tea ceremony that competes for luxury.
It was not only about tea-things themselves but the place it is held also changed.
Tea ceremony before that had been held at syoin. (a drawing room)
But Wabi Tea was held at a small mat room with about 6 square meters and it had come to held at the room with between 1.4 square meters and 1.8 square meters in the end.
The small space was enough to enjoy tea, no need of wasted space there.
Sitting on one’s heels is called Seiza in Japan.
And there is a opinion that the custom of Seiza started in the tea ceremony. (There are several opinions of the origin of Seiza)
Wabi Tea looked for and focused on inner contentment instead of superficial luxury.

Sabi is a noun form of Sabiru.
Sabiru means get rusty.
Chinese character of Sabishii (feel lonely) is also same Sabi.
In the old days, same meaning of Sabu was used.
It means get old and fade.
It references looks or appearances of things.
Everything gets fade, rusty and old some day.
It might look negative point but the process or state also has beauty.
Beauty of getting old towards finish its role is Sabi.
Sabishii is also same.
When there was nobody around you it might make you feel lonely but the quiet state that has nothing around you is also spirit of Sabi.
Spirit to enjoy quiet atmosphere and feel it is Sabi.
When you feel vanity and beauty in petals of cherry blossoms that are falling to the ground in the breeze you might found Sabi in it.

As we can see from the spirit of Wabi and Sabi, it was not seeking perfection or external beauty.
We humans seek to add something to make perfection or high quality thing.
The idea of it is addition but Wabi Sabi is opposite.
The idea of Wabi Sabi is a subtraction.
By subtracting, people can approach true essence and true beauty it originally has.
In a way, it might be the perfection over perfection.
Wabi Sabi, they are different words but always set.
To understand beauty of Sabi, one needs mind of Wabi that can finds beauty in it.

You can see these traits in Japanese antique, too
I myself have official licence of antique and saw genuine Japanese antiques in the very old days.
I often saw antiques that is left enough space and not like in perfection for design.
Most of the design or pattern in that of China, Europe, etc were beautiful and were decorated with all the surface in those days.
But it was not for Japanese antique.
Just beautiful and perfect looked like not that attractive to the people in those days that they did not decorate all the space perfectly and made space on purpose instead.
Tamadare that has left on the surface shows it clearly.
Tadamadare is droop of glaze which is made on the surface of antique such as jar, pot, etc.
If one pursues perfection, it is not good to leave the sign of droop on the surface as it doesn’t look good.
But they did not remove Tamadare rather left it on purpose.
Because people found beauty in this natural design and actually antique that has Tamadare on surface became very expensive compared to perfect design without Tamadare.
Concept of margin is same as that of Tamadare.
People found beauty in dish, pot, etc. that is not filled with pattern or design.
Beauty of less, they might felt spirit of Wabi Sabi in there.

To tell you the truth, even now I myself am not sure if I fully understood Wabi and Sabi.
But when I feel beauty of fallen leaves and petals of Sakura falling at the last stage, I feel mixed feeling that can not explain in words.
Wabi Sabi might be Japanese words but everyone also can feel and understand Wabi Sabi.
Now world is filled with things and information that I feel the thought of Wabi Sabi is sometimes needed or want to keep the spirit that can feel Wabi Sabi in things.