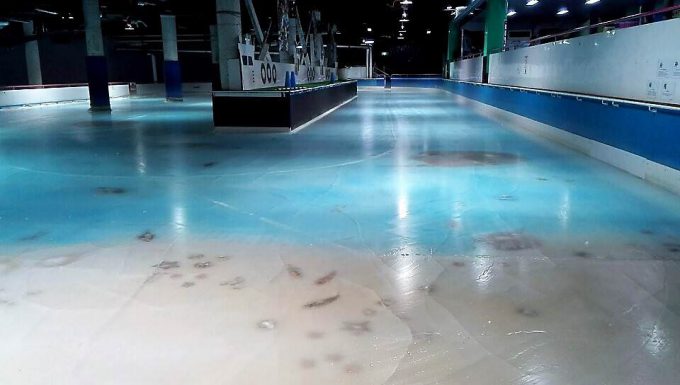 Theme park in Fukuoka Prefecture suspended business of its ice rink as it got flaming by displaying 5000 dead fish frozen into ice at the ice rink.
It drew heated criticism.

Why this kind of thing happened?

I take a look at the opinions of people.

Excuse of the company

General manager of the theme park told we went too far to amuse people.
They wanted people to enjoy skate on the skate rink that looks like sea by displaying 5000 fish frozen into it.
If the fish is still alive it is a big problem but they bought dead fish that is going to throw away anyway that they thought it is OK.

I think there must have been many criticism or objection inside.
But the top decide everything and gave the go signal for it in the end.

People criticized it saying it is too cruel, nobody wants to skate in such a skate rink, etc.
The company got flaming on the web soon.
This reaction is understandable and easily imaginable.

One man added fuel to it

One man or local hero in the city retorted to the people who criticized it.
Local hero is a kind of mascot character to give a boost to the area.

My thought of for and against the issue

I tell this problem from 2 point of view.
One is just only from the view of business and only from human side who domain the world.

Actually there is no problem like the local hero said although what he said is missing the whole point.

We eat meat, fish, enclose animals, cut tree, etc. for us.
If we think about only ourselves, I mean “man”, there is no problem.
Just making profit is important for the company.

I take it from another point.

But we are not living only with instinct.
We hurt, cry, feel sorry not only for ourselves but for others, other living creatures, too.
It might be contradicting that it is not OK for cat, dog, etc. while we eat beef, pork, fish, etc.

But that’s the human.
This point is so strong.

Human emotion and morality of human, the company missed them.

Actually I understand both opinions and I don’t think good or bad for this issue.

But if I say my private opinion, I don’t feel like skating in that kind of atmosphere.
I’m also one of the man who is really contradicting.
But I want to treasure life not only human but also other creatures on the earth as best I can.
Even if it is dead.

What the local hero said was not to the point at all as specimens of insects or leather, fur, are not for fun but for research and we make use of it (actually I’m against fur and leather personally although I’ve already gotten a few of them).
Keeping animals as a pet might be a kind of fun but people who keep them love them and no intention of making profit from them (I leave few cases of YouTube or instagram, etc)

Enjoy dead thing, this action itself caused a feeling of intense dislike among people, that’s the point of this issue.

It’s not the matter of rational or irrational.
Such a thought is physiologically unacceptable to us.

This issue is not only for the dead fish

Actually some writers including I write about this issue and say this or that.
But I feel like they are all made afterwards.
Because there was no flaming when the skating rink opened to the public and there were people who enjoyed them.
I think people just enjoyed the skating were saying this is like a kind of sea and rare.
There was no issue rather it was accepted as it was.

We who are against it might say “No, I was different if I had been there, I would have criticized the company at the very first strongly.”

But can you criticize alone when no one was against it rather when everyone was enjoying the skating?

You might even notice this is a problem if there was no one around you who criticize it.
Or you might not have had enough courage to point out strongly even if you feel something wrong in your mind.

People get caught up in the mood very easily and in some cases you yourself might take part in it without notice.
It’s very easy to say something afterwards because you can find what is good or bad in that time.
And this is the point we should think of.

I have to say there was a point that I agree with the local hero said leaving the matter of his getting off the track.

From here, I tell strong opinion of mine although I don’t force my thought on others.

I think he said “what’s the problem of the dead fish when we kill and use them for ourselves” if I summarize.

We sometimes feel that eating dog is uncivilized behavior and blame the people who eat them but is it OK for pig, cow, cock?
We shout about dead thing but how about living creature that confined in a cage?
I saw some items in stores that including living or dead creatures in them and are they OK?

I think most people don’t against it as they were accepted as they were.
As I wrote above, people can caught up in the mood very easily and taking part in it without notice.

This is not only the matter of the dead fish but there are many similar issues in this world to think about.

Actually I think that’s good he threw his opinion at the same time.
Sometimes that kind of thing is necessary leaving the matter of correct or not correct.
At least this issue showed us something to think of.

« Woomo or Hatchimals in Japan Sold Out One After Another
Comic Con Tokyo 2016 was finally held in Japan! »