Cup noodle collaborated with Final Fantasy.
It is the 30th anniversary of Final Fantasy.
This is cool!
The concept of it is “Ultimate enemy is hunger!”
Anyway I like the video of Cup Noodle made for this project.
Leviathan is summoned from Cup Noodle!!
Regis, that’s not Noctis but Cup Noodle, you are talking to wrong partner!! 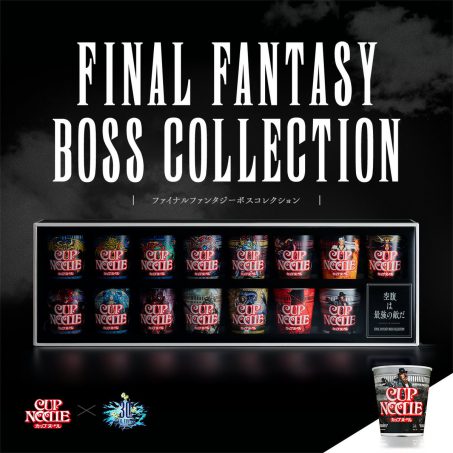 Source : Cup Noodle Final Fantasy 30th Anniversary
These cup noodles are set of 12 types and limited 30000.
The Price is 6048 yen (tax included) that means about $55.
So about $5 for each cup noodles.
That’s certainly a quality cup noodle!
But the package of it is really cool as it has each characters of final boss on it.
Followings are all the final bosses in Final Fantasy that printed on the package of cup noodles.
Chaos (FF1), Emperor (FF2), Cloud of Darkness (FF3), Zeromus (FF4), Exdeath (FF5), Kefka (FF6), Sephiroth (FF7), Ultemicia (FF8), Kuja (FF9), Seymour-Guado (FF10), Shadow Lord statue (FF11), Gabranth (FF12), Orphan (FF13), Bahamut (FF14), Ardyn Izunia (FF15)
I think you might know some of them and some of them are very cool and popular even if it is enemy.
From FF1 to FF6, the prints are that of video games we know, reminds us of old days.
After FF 7, FF7, FF8, FF12, FF13, FF15 are all designed by Tetsuya Nomura.
Tetsuya Nomura is famous designer and he drew some characters of Final Fantasy and Kingdom Hearts that I think you have already seen his work if you like those video games.
It might be very rare chance we can see all the final bosses of Final Fantasy at the same time. 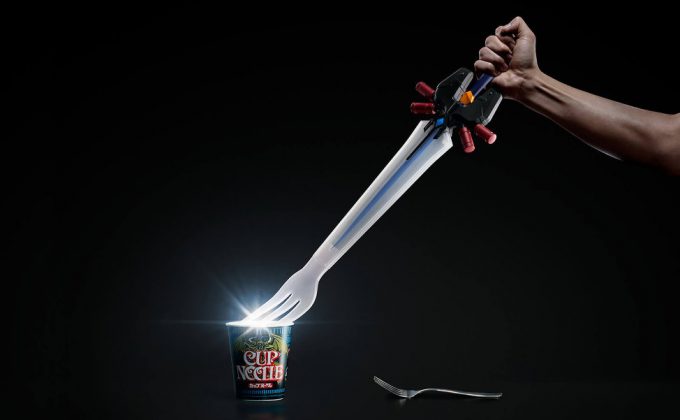 Source : Cup Noodle Final Fantasy 30th Anniversary
It looks like the bonus is only for those who live in Japan as long as I checked its official page.
What people can get is not only cup noodles but they might get Artemaweapon.
There are two types of Artemaweapon in Final Fantasy, one is Artemaweapon as a sword and the other is ultima Weapon as a monster.
What people might be able to get here is Artemaweapon as a sword.
Artemaweapon is the strongest sword of protagonist and that draws its power from the user.
So it makes critical damage when the protagonist’s HP is max.
But it do almost no damage when the HP is very low.
People might get this great sword, technically speaking sword-like fork!!
The length is 60 cm > _ < How you can eat cup noodles with such a long fork!! It is certainly ultimate fork and looks like your HP is consumed because of its difficulty. Only 30 people can win the fork among 30000. If he or she was lucky enough to be one of them, it might be an interesting challenge to eat noodles with it while most of others display it. There seems to be also other limited special bonus for purchasers. No one knows for now but it looks like the bonus will be announced one of these days.

It is already 30th since I first saw the video game Final Fantasy.
I was in elementary school at the time and Final Fantasy was a video game of family computer in those days.
I remember some of my friends were talking about Final Fantasy and I thought this is modern game and modern talk at the time, haha.
I also came to play Final Fantasy 4 soon.
Now the image of Final Fantasy is as if I were seeing film, it is not video game anymore.
But its basic sounds, weapons, characters seems to be handed down without a big change.
Now I’m wondering if I should buy this cup noodles.
It is certainly cool cup noodles that I may decide after they announced another bonus.