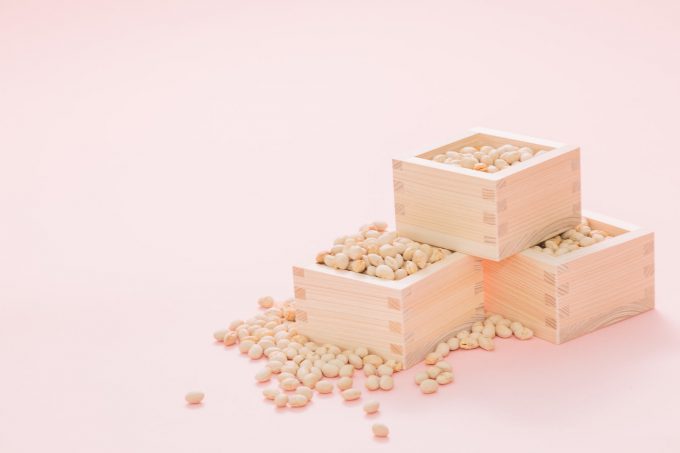 Setsubun is the season to throw soybeans at the person who plays a role of demon.

I remember the person who wore the mask of demon came into kindergarten and I threw the beans at him with other boys.
It was a kind of traditional event and you can see it in Setsubun Festival, too.

Let’s take a look at the origin and why do people throw soybeans and celebrate setsubun.

The year is separated 4 seasons of spring, summer, autumn, winter in Japan.
And each seasons are separated again into 6 that there are 24 separations through the year totally.

And one of them in spring is called Rissyun in Japan.
That marks the beginning of Spring and the date before Rissyun is Setsubun.

In the old days, the time changes from winter to spring was regarded as the beginning of the year.
The time when the season changes was also considered to be the time evil spirit takes people.

In Onmyodo or yin-yang philosophy in Medival times, the night of Setsubun was considered to be most changeable date that the yin changes into yan through the year.

The date was thought to be the date that demons or ogres that usually hide appear in front of people.
People need to drive these demons or evil spirit away by throwing beans.
This action of throwing beans is derived from Tsuina in China.

This is an event of Imperial Court in Heian period in which Onmyoji or Master of Yin yang drives disasters and impurities away just before the start of the year.

In the Muromachi period, it spread among ordinary people and they came to throw beans.

Why do people throw beans?

But why people use beans for driving demons away?

Because bean is read “Mame” in Japanese.
“Ma” can be read dark or evil in another way and when you write destroy, or horobosu in Japanese you can use Chinese character “Me”.

That is, Mame means destroy evil.
By throwing beans, people could drive demons, ogres and evil spirits away.

Bean is also regarded as a holy grain which has a spirit or a soul in it that it was used not only for Setsubun but for other Shinto rituals.

By the way, this beans have to be roasted soybeans as it is regarded as a bad omen if you throw fresh soybeans as they sprout if you forgot to pick them up and leave.

Recently some people also use peanut covered with its hull instead of soybeans.

“Oni wa Soto Fuku wa Uchi” is the phrase people use when they throw soybeans.
“Oni” means demon or ogre and “Soto” means outside.
“Fuku” means fortune and “Uchi” means inside.

So people say “Bad luck and demons outside, fortune inside” when they throw beans.

Custom of Setsubun is that to eat the number of beans that correspond with the age that you will be in the year after throwing the beans by picking them up.

What is Ehou Maki or Ehou Roll 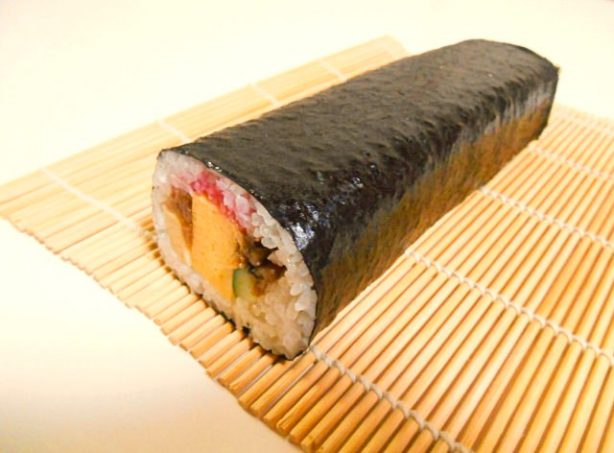 Ehou maki is a food that like rolled sushi which has been eaten on the night of Setsubun.

“Ehou” is a lucky direction of the year that Shinto god Toshigami-sama exists and “maki” means roll.

The origin of it is not certain, some people say it is the Age of Civil Wars but others say it is in Edo or Taisyou period.

If I asked actually I didn’t know this Ehou maki when I was little.
I think Ehou maki was not famous until recently although the origin might have been old and some people might knew it.
And I understood the reason after checking the history.

Ehou maki was eaten in Osaka area and it was not famous in Kanto area such as Tokyo, Saitama, etc. where I live.
And it was a convenience store that made Ehou maki famous nationwide.

Yes, it corresponds with the time I came to know this food Ehou maki.

It is recommended to use 7 ingredients for Ehou maki as the number 7 is also used in the seven gods of good fortune in Buddhism.

Interesting rule is to eat up whole role in the direction of Ehou without talking.
It is said that if one speaks while eating, the luck runs away.

Who came up with this funny idea first?

Anyway now you can see Ehou maki all over Japan in convenience store or supermarket when the date of Setsubun comes close.
You can buy a roll of Ehou maki at about $3.

Let’s eat Ehou maki in the direction of South-South-East (Lucky direction of 2018) without speaking if you buy it.

There are many places that hold event in Tokyo on the date of Setsubun.

If you visit more than middle scale temple you can see festival takes place there.
People throw soybeans and you can enjoy traditional foods of Japanese festival.
You might be able to enjoy ritual event related to Shinto or Buddhism.
You can also see famous people in Japan in these Temples.

Summarized here are big scale Setsubun festivals among them in Tokyo.